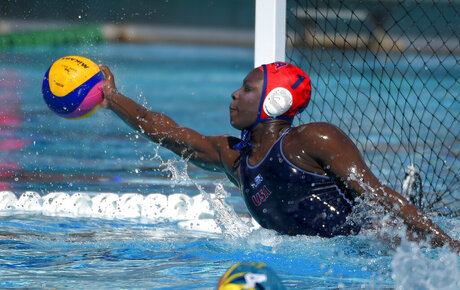 By: JAY COHEN (AP)
LOS ALAMITOS, Calif.Copyright 2020 The Associated Press. All rights reserved. This material may not be published, broadcast, rewritten or redistributed.
33.8031-118.073

LOS ALAMITOS, Calif. (AP) — Donna Johnson just wanted her five children to be safe around the pool at her Miami home. That was it, really, the first step in Ashleigh Johnson's path from prodigy to USA water polo.

Swim lessons turned into meets when their instructor told Donna Johnson her children were so good she had nothing left to teach them. When Ashleigh and her siblings continued to show athletic potential as they got older, Donna Johnson, a single mother and nurse from Jamaica, delivered a simple message to them.

"For everything that they do, it's not about pressure, it's about maximizing your potential," she said.

Now her oldest daughter is about to make history this summer. Ashleigh, a goaltender blessed with jaw-dropping athleticism, is a lock for Rio de Janeiro, putting her on track to become the first black woman to play water polo for the U.S. Olympic team.

While this is just the fifth games for the women's tournament, Johnson's ascension to elite goaltender is a welcome development for a sport looking for more diversity and growth outside of water polo-crazy Southern California.

Each of Johnson's teammates is from the Golden State, and the same three Pac-12 schools — UCLA, Southern California and Stanford — dominate the roster. Seventy-five percent of USA Water Polo's roughly 42,000 members live in California.

After starring at Ransom Everglades High School in Florida, Johnson opted for Princeton instead of USC.

"I think Ashleigh Johnson's the future of our sport in the U.S.," USA Water Polo CEO Christopher Ramsey said. "She's an out-of-California athlete who grew up in Florida. She went to Princeton, high academic achiever from a different background than a lot of traditional water polo families are from."

Just a short while ago, Johnson, 21, wasn't interested in that future, at least with the national team. The thought of moving away from her tight-knit family and joining a new team in California wasn't appealing to her, but several conversations with coach Adam Krikorian helped change her mind.

Krikorian first heard of Johnson about 10 years ago when he was the head coach at UCLA. Nicolle Payne, one of his assistants with the Bruins and a former national team goaltender, was working a camp in Miami when she sent an email to Krikorian about America's next great goaltender.

"She said, 'Adam, keep this name in your mind,' and she told me her name — Ashleigh Johnson," Krikorian said. "'She is the most amazing goalie I have ever seen.'"

It's easy to see what got Payne's attention.

The 6-foot-1 Johnson has long arms, perfect for firing outlet passes for U.S. counterattacks and guarding the top parts of the goal, and she cuts through the water with impressive ease. Sick of swimming in high school, she was offered an out by her mother and coach if she won the 50-meter freestyle at states as a sophomore. So she won and walked away.

She collected 54 saves while helping the United States qualify for the Olympics at a tournament in the Netherlands in March, including 10 stops in an 11-6 victory over Italy in the final, capping an 8-0 performance for the Americans. But that gifted sprinter is still inside her.

At a recent practice, assistant coach Chris Oeding gave the team a chance to cut short the swimming portion of training if the players could assemble a sub-1:40 200-yard freestyle relay team. Krikorian and assistant coach Dan Klatt offered a nodding Johnson as a candidate, but four different players were chosen.

They made the time, but Johnson stole the show by swimming the second leg alongside the relay, leaving Krikorian and Klatt shaking their heads as she churned through the pool like a motorboat.

"She's a freak," Princeton coach Luis Nicolao said. "She's just athletic. I often joke she could probably start for our basketball team, track team, swim team, she just has that natural ability to succeed at anything she does."

Johnson and her sister, Chelsea, play for Nicolao with the Tigers. They have two older brothers, Blake and William, and one younger brother, Julius.

Their parents got divorced when Ashleigh was little, and Donna Johnson raised the kids mostly on her own. It's a challenging juggling act not lost on her children.

"I mean she's such a hard-working, loving and determined woman," Ashleigh said, "and she's taught me that hard work ethic and just to try my best at everything and love what I do."

Chelsea Johnson, who joked that she followed her sister to Princeton because she didn't want to play against her, said she sees similarities between Ashleigh and their mother.