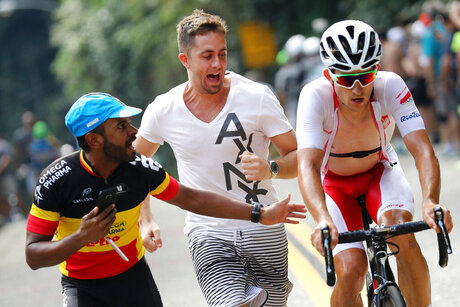 NEW YORK (AP) — An estimated 26.5 million people watched NBC's coverage of the Olympic opening ceremony, a sharp 35 percent drop from the record-setting viewership of the curtain-lifter in London four years ago.

The opening ceremony of the London Games was seen by 40.7 million people in the U.S. NBC suggested Saturday that the gap will be narrowed when details about time-shifted viewing and people who streamed Friday night's telecast on mobile devices become available in coming days.

The four-year difference was much kinder to NBC the last time around; the Beijing opening in 2008 reached 34.9 million people, according to the Nielsen company.

One of NBC's pre-games fears came true: viewership dropped off after the entrance of the United States team in the Parade of Nations. But because the Portuguese alphabet was used, the U.S. team (Estados Unidos) appeared much earlier in the broadcast than is typical.

NBC also front-loaded many of its commercial breaks early in the broadcast so there were fewer during the Parade of Nations. Judging by the harsh social media reaction, that may have backfired. It was a culture shock to binge-watchers and time-shifters who have become accustomed to television without commercials.

The ceremony also ran long, and wasn't helped by NBC's decision to air it on tape-delay so it started in prime time. The lighting of the Olympic cauldron wasn't shown until after midnight. A joke by Matt Lauer during the teams' entrance had a ring of truth: "Are we at Timor-Leste (East Timor) already?" he said. "Time is flying by."

The London Games proved a smash success for NBC. Viewers may simply be less interested in the Olympics from Rio — and that won't become clear for a few more days.

TAKE A LOOK: NBC's time-tested formula for its prime-time coverage concentrates on swimming and diving, gymnastics, track and field and volleyball. Still, the broadcast is the point of entry for the majority of viewers, and can do a better job reflecting the breadth of the event. Cutting some of the taped preliminary gymnastics competition at the start of Saturday's show in favor of a five-minute run-through of the day's biggest stories would be welcome. Fortunately, Bob Costas made note of American Virginia Thrasher's gold medal in an air rifle event later in the show.

TIGER?: NBC's Dan Hicks explored the relationship between Hungarian gold medal swimmer Katinka Hosszu and her intense husband/coach, noting that it struck some other swimmers as harsh. Then he crashed on the rocks of sexism by saying that "he has turned her into a tiger in the pool."

SORRY, TOM: Wise production choice to interrupt Tom Brokaw's taped report on the Amazon when a do-over was called for the finish of a beach volleyball match. It establishes in viewers' minds that live competition takes priority.

BIKE RIDE: The bicycle race won by Belgian rider Greg van Avermaet was a blast to watch, unfolding over several hours on NBC on Saturday, the kind of experience you can't get in prime time. It was a lesson for announcers Paul Sherwen and Christian Vande Velde to keep in mind that many viewers are new to their sport. The sheer chaos of the mountainous portions of the race, the course clogged with motorbikes, autos and spectators who ran alongside and even touched competitors, seemed shocking. That's not unusual in major cycling races, and the announcers didn't mention it.

WATER QUALITY: Given all the pre-games publicity about water pollution, it was wise of rowing announcers Leigh Diffey and Mary Whipple to discuss the conditions during a Saturday morning rowing heat, with details about the steps Olympians are doing to protect themselves. "It's almost on the back-burner," Whipple said. "It's a non-issue so far." Still, it's something announcers for all of the water sports should keep bringing up.

REFUGEE: The entrance of the 10-member team of refugees was a highlight of Friday's opening ceremony, so it was important for NBC's Jimmy Roberts to return to the story of these athletes during Saturday's telecast. "What a strange and wonderful concept — running toward something instead of running away," Roberts said. Roberts noted that none of the athletes are medal contenders, but it's worth keeping up with their stories as the Olympics go on.

LOOKAHEAD: The American women's basketball team begins its quest for a sixth straight gold medal with a preliminary-round game against Senegal.