Home » Brazil » As the Olympics loom, the gymnastics party may be in college 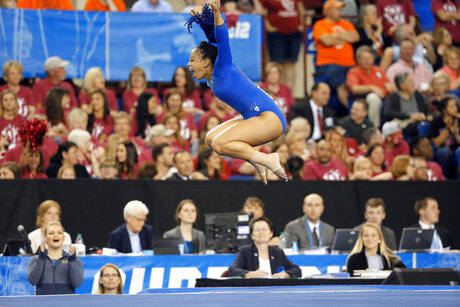 By: WILL GRAVES (AP)
RIO DE JANEIROCopyright 2020 The Associated Press. All rights reserved. This material may not be published, broadcast, rewritten or redistributed.
-22.9028-43.2075

RIO DE JANEIRO (AP) — Sophina DeJesus won't be on the floor when Olympic gymnastics begins this weekend. Her career likely ended in April when she wrapped up her senior year at UCLA by helping the Bruins to a fifth-place finish at the NCAA championships.

And DeJesus is OK with that. Spend the better part of your life in a gym and eventually you get to the point where it's time to move on.

Besides, the 21-year-old managed to do something this spring the three-time world champion Simone Biles, reigning Olympic champion Gabby Douglas and the rest of Team USA that plans to crash the medal stand in Rio over the next two weeks has yet to accomplish, at least not yet:

In a sport that largely only enters the public consciousness for two weeks every four years — and even less frequently at the college level, where interest can be fervent if not widespread — DeJesus launched a 90-second remix of an old favorite on Feb. 5 in a dual meet against Utah.

On the judge's sheet, DeJesus' floor routine that night looked just like most others. Three tumbling passes. A series of smaller elements scattered in between. All the necessary requirements designed to post a big score.

In practice, however, it was something else entirely. Portions of her curly hair dyed blue, the former child hip-hop dancer unleashed a series of moves ripped straight from MTV, (at least the part of MTV that still shows videos).

And the crowd — not to mention the teammates that mobbed her before her score of 9.925 was even posted — completely lost it. The internet did, too. A few million YouTube views later (currently 14 million-plus and counting), DeJesus found herself on a couch chatting up Ellen DeGeneres and trying to explain how she took her floor routine and put it on fleek.

"This was my last year," DeJesus said. "I need to end this year with a bang. I wanted to do these cool dance moves and hope everyone can go along with me."

So UCLA coach Valorie Kondos Field let her do just that, working with DeJesus to put together a set that highlights DeJesus' unique charisma.

"It was 'Let's just feel all the latest dance crazes and mash'em together,'" Kondos Field said. "You come to me with something and I'll craft your routine and I'll make it gymnastics respectable."

While not as technically demanding as routines done at the elite level — where gymnasts are required to do four tumbling passes instead of three — it also created some serious buzz. Kondos Field believes the immediate visceral response came with an underlying message: perhaps it's time for occasionally staid International Gymnastics Federation code of points to live a little.

"We want to respect the sport but where I think the international scene could loosen up a bit is to make the routine, give them a theme, make them more entertaining," Kondos Field said.

Kondos Field isn't suggesting girls start breakdancing on the balance beam, but while tumbling runs have evolved over the decades — watch Biles and U.S. teammate Aly Raisman regularly test the laws of physics in Rio — the music and the dance at times might as well be stuck in a time warp.

Kyla Ross, who won gold as part of the Fierce Five that stormed the podium in London four years ago, competed that year with a floor routine set to "Phantom of the Opera," her neck nearly spasming as she constantly (and dramatically) lifted her chin more than a half-dozen times. She laughs at the memory, knowing her routine will look far different when she joins Kondos Field at UCLA in the fall.

"I want to show a different side of me, that'll be fun," Ross said. "I want to do something that's going to be remembered."

While gymnastics is typically one of the most watched events at the Olympics, it retreats to its popular if small place in the sports world once the flame goes out. It's telling that DeJesus hopped on "Ellen" before Biles, who didn't get an invite until she racked up 15 world championship medals. There's a lot of noise out there in sports. DeJesus found a way to cut through the clutter.

"The majority of the people that viewed it weren't just die hard gymnastics fans," Kondos Field said. "They were just people on social media and want to see something fun and cool and hip. It went viral because of the six different dance moves that are relatable to the lay person."

Biles, at one time a UCLA commit before opting to turn professional last summer, has a pretty good idea of what would happen if she approached U.S. national team coordinator Martha Karolyi and suggested trying to incorporate DeJesus' choreography into her routine.

"I think Martha's jaw would drop," Biles said with a laugh.

Probably. And while members of Team USA universally support the artistic freedom college gymnastics provides, they're not quite so sure how it would go over at the international level.

Douglas pointed out her own attempt to do "The Dougie" while goofing around after she won gold in London. Four years later social media is still giving her a hard time about it.

"I feel that dancing would be tiring, too," she said. "We have four passes, four difficult passes and they have three. I feel like we would be sloppy."

It would also put the FIG, judges and coaches in a difficult spot. It's one thing to teach an American gymnast how to "whip." It's another to do the same in a place not as attuned to western culture.

"They might be scratching their heads and wondering what to do," Carpenter said. "They'd be like, 'What do we do with that?'"

The envelope is being pushed at the Olympic level, if in a slightly less in your face way. Laurie Hernandez and coach Maggie Haney collaborated to put together a floor routine that includes plenty of preening and posing. Biles' electric smile, effortless talent and "come follow me" choreography — set to Brazilian-style music in a nod to the host country — make her unmissable.

If there's one gymnast who can take the seeds being planted at the college level and elevate it, it may be Biles.

"She's got the personality," Kondos Field said. "She's got a really great balance of respect for Martha and respect for her coach and respect for the world of gymnastics while she certainly is doing it her way. There's never been someone that has as much fun on the international floor as she does."