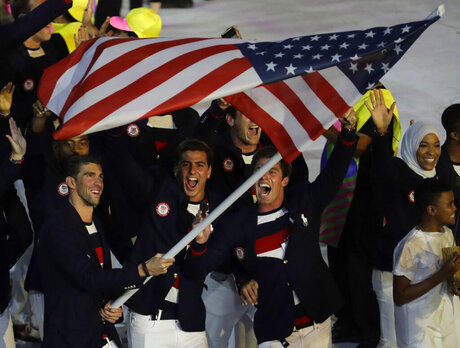 By: DAVID BAUDER (AP)
Copyright 2020 The Associated Press. All rights reserved. This material may not be published, broadcast, rewritten or redistributed.

NBC is proud of showing every Olympics competition live online, and many on TV. So, it makes the decision to air Friday's opening ceremony via tape delay a seemingly unnecessary provocation to followers accustomed to a see-it-immediately world.

The ceremony, narrated by Matt Lauer, Hoda Kotb and Meredith Vieira, was delayed by one hour on the U.S. East Coast, four hours out West. It was not offered live online. Much like four years ago when there was a longer delay from London, the move drew complaints on social media.

"There's a huge world party going on right now without us because, you know, we're American," was one message on Twitter before the U.S. telecast started.

For some viewers, the experience was worsened by the pace of commercials, perhaps a shock to time-shifters accustomed to fast-forwarding through ads. NBC took eight commercial breaks in the first 65 minutes of the ceremony. Since the announcers were rightly hanging back and taking in the show, it seemed like Lauer was announcing an upcoming break half the time he opened his mouth.

"New drinking game: take a shot every time they go to a commercial," one viewer tweeted.

NBC argued that the time delay allowed the network to edit for a smoother broadcast of what is essentially an entertainment spectacle. The ceremony is a celebration of Brazilian culture, said Mark Lazarus, chairman of the NBC Sports Group, and "we think it's important that we're able to put that in context for the viewer so it's not just a flash of color."

More importantly, the delay allowed NBC to show the ceremony entirely in prime-time across the country, for which advertisers pay a premium.

The network has some 40.7 million reasons to justify its stance. That was the viewership for the London opening ceremony, the kind of number that leads NBC to conclude that the vast majority of fans like things just as they are.

PARADE OF ATHLETES: Was the U.S. team making a political statement by having fencer Ibtihaj Muhammad, dressed in a hijab, the traditional Muslim head covering, march in the first row of its athletes entering the stadium? Credit NBC's Vieira for pointing out Muhammad, but she made no mention of any political context.

EYES RIGHT: Yes, social media can be a cruel place. Costas probably didn't appreciate being reminded of the gooey eye infection that forced him off the air for a few nights during the Winter Olympics in Sochi. For the record, his eyes were clear and bright Friday.

RISE UP: It seemed jarring, at the end of Thursday's Olympics preview, for NBC to debut a music video of Katy Perry's new song, "Rise." The network has declared the song its Olympics "anthem" and promised viewers they'll be hearing it frequently over the next two weeks. That's pretty sweet publicity for Perry, the sort most artists would die for. An NBC representative described it as a "value exchange" between the network and record company and if the song catches on, NBC can bask in the glow. The Olympics audience tends to skew old, and association with a pop star could be a way to bring in more young people.

COMING UP: American beach volleyball star Kerri Walsh Jennings has a recurring series on NBC, once every four years. She's back Saturday, this time with a new co-star: her new partner April Ross.