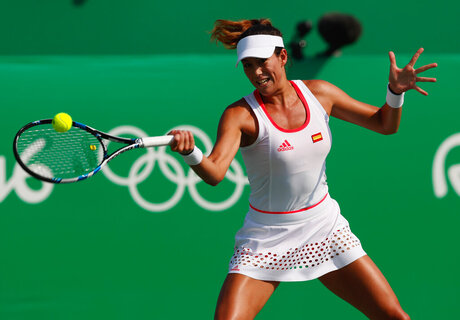 Even with the big lead, keeping it together through those last couple of games was tricky.

"You start getting emotional, and there's no hiding it," the 22-year-old Puig said. "You start feeling those butterflies, those nerves. It's all of that coming out.

Ranked 34th in the world, Puig has never reached the quarterfinals at a Grand Slam. Now she's two wins from an Olympic medal — and playing on the half of the draw that's missing top-ranked Serena Williams, who lost later Tuesday.

Puig will face a player with a similar ranking for a spot in the semifinals: No. 32 Laura Siegemund, a 28-year-old German who is having a career year. Siegemund won her first WTA title at the Swedish Open last month.

Five of the top-six seeded players have already lost on the women's side.

In 2013 at the French Open, Puig became the first woman representing Puerto Rico to reach the third round at a major in the Open era, which began in 1968. But at her first Olympics, her nationality takes on much more resonance.

"When I'm playing in the WTA, it's more like I'm playing for myself — my job, let's say," she said. "Here, it's not really my job. It's for my country, and I think nothing in the world can compare to that. It's the most special feeling when you put on your colors of your country and you're walking around the Olympic Village and everybody looks to see your country on the back of your shirt."

Muguruza is also 22, and she's already a major champion. But after beating Williams in the final at Roland Garros for her first Grand Slam title, the Spaniard lost in the second round at Wimbledon. She had 29 unforced errors to 15 winners on Tuesday.

Muguruza said she's handled that French Open win just fine, that she hasn't played enough since to draw any conclusions about the state of her game.

"The year is long," she said. "You never know what can happen."

And though she was seeded third and has won a major title this year, Muguruza insisted that "I was not expecting to come here and go with the gold medal" at her first Olympics.

She won her second-round doubles match with Carla Suarez Navarro later in the day and will play mixed doubles with Rafael Nadal.

"I'm over it," Muguruza said of the singles loss.