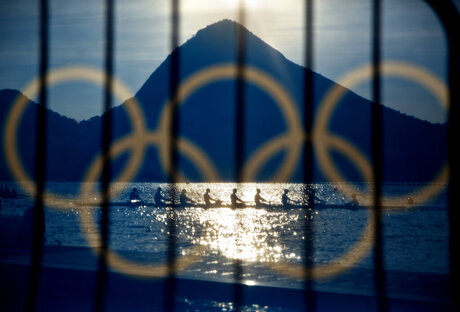 RIO DE JANEIRO (AP) — On Sunday night, right after the flame has been extinguished in Rio de Janeiro, another Olympic project will burst out of the starting blocks.

It's the launch of the Olympic Channel, a $450 million venture designed to keep Olympic sports and athletes relevant in the years between each games and attract new, younger audiences to a sports movement that has recently been battered by corruption and doping scandals.

The digital channel, which will operate 24 hours a day, 365 days a year, will go live after the closing ceremony of the Rio Games, providing a mix of live sports events, documentaries, archive footage, news and highlights. It's an undertaking that is still in evolution and whose success, or failure, will depend on whether today's generation finds it relevant or tunes out.

"This is just the starting point, not the end point," Yiannis Exarchos, the head of the new channel, said in an interview with The Associated Press. "We want to be able to surprise people and make it look different. It's not an institutional tool. This is about telling stories in a way that can bring younger people to the world of sports."

The project was approved in December 2014 as part of International Olympic Committee President Thomas Bach's "Agenda 2020" modernization program. The free channel will be available worldwide via a mobile app and online across mobile phones, tablets and other devices.

The channel is based in Madrid, home of the Olympic Broadcasting Services, the IOC's television arm. Nearly 100 staff from 25 countries are currently working at the channel's headquarters in Spain.

Exarchos said the channel has already prepared more than 600 pieces of original programming, including 100 hours of "high-end documentaries and premium content." Much of the content will be material from the Rio Games, which will be become available in full at the end of the year when global TV rights deals expire.

Beyond producing feel-good stories, the channel has another, more challenging goal — encouraging young people to get off the couch and play sports. That sounds counterintuitive from a channel that gives kids another excuse to stare at their screens.

"We're trying to push video to make people active," Exarchos said. "For me this will be the criteria of success. It's not enough for the channel to be popular. It would be even happier if we demonstrate that these people go out and start doing sports. The channel needs to help in that. Let's see."

The channel already has formal agreements with 27 of the 35 summer and winter Olympic sports federations. The IAAF and FIFA are not among those, though Exarchos noted that was because both had "a lot on their plate" this year, referring to corruption and doping issues. But he said soccer and track and field are "super eager" to get involved with the channel.

The channel has signed up 11 sports events that will be shown live between September and December, including triathlon, canoeing, rowing and an Olympic ice hockey qualifying tournament.

What the channel won't do is compete or pay for broadcast rights. It doesn't air the Olympics themselves, which are shown by networks like NBC in the United States after paying billions of dollars to the IOC for exclusive rights. Many sports federations also have rights deals in place for their own international events.

Exarchos said the Olympic Channel has "huge synergies" with NBC, which holds U.S. rights through 2032, and that the American market is a key target.

The channel will offer documentaries that feature "inspirational, dramatic or emotional stories of some of the biggest athletes in the world," he said, adding they won't be presented in a "didactic" way.

"'That may be a little bit of a surprise to those used to a traditionalist story line," he said. "It will be presented in way that can be enjoyed by younger people."

At the channel's disposal is the IOC's rich trove of archive footage, much of it never seen before by the public, and some going as far back as the 1912 Stockholm Olympics. About 42,000 hours of footage that was stored at the Olympic Museum in Lausanne, Switzerland, has been digitized and will form a core of the channel's content.

"We don't simply replay the archive," Exarchos said. "We work with it, creating fresh ways of looking at it, sometimes even in a funny or bonkers way."

The channel will be offered originally in English, but localized versions in other languages are also in development.

The IOC is kicking in more than half of the $450 million to finance the channel for the first seven years. The international federations and national Olympic committees are paying the rest. Exarchos said he expects the channel will break even within seven years.

Why launch the channel at the close of the Rio Games? To keep the spirit going and stave off the letdown associated with the day after each Olympics, Exarchos said.

"It's a big opportunity to reverse the emotional down of this day," he said. "It will be very much linked to the games and the end of the games."