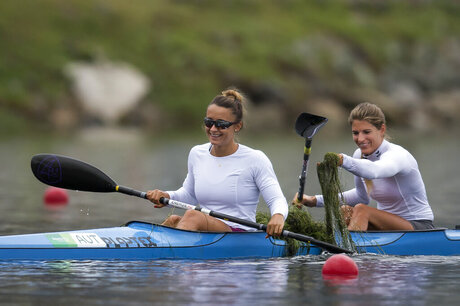 RIO DE JANEIRO (AP) — The second day of an Olympic canoeing test event on Saturday brought more complaints about weeds floating in Rio de Janeiro's polluted course, with canoeists saying it was too shallow and needed to be dredged.

The Rodrigo de Freitas Lagoon is also the venue for rowing in next year's Olympics.

The lagoon in central Rio has been the focus of concern — along with separate venues for sailing, triathlon, and open-water swimming — since The Associated Press published its own independent study six weeks ago showing high viral levels from sewage contamination in all of Rio's Olympic water venues.

"One of the things that's clear is that the race course must be cleared," Portuguese canoeist Fernando Pimenta said. "Remove as much weed as possible."

Canoeists complained that the aquatic weeds were getting caught in rudders and hung up on their paddles, making fair racing impossible.

Simon Toulson, general secretary of the International Canoe Federation, said this would not happen in the Olympics where weeds would be cut and retrieved.

Toulson blamed the weed growth on warm weather in Rio's winter, though others speculate it's related to pollution.

On Friday, German canoeist Franziska Weber described the water as "red and brown. It's not the typical water color."

German canoeist Max Hoff lost a 1,000-meter race Saturday that Pimenta won, and said he got tangled in weeds.

"The Olympic Games is the most important race we have all of the year," Hoff said. "And for that, we should have the best conditions we can get."

Hoff also said the lagoon was too shallow __ he estimated 2 meters deep and said rules specified it must be twice that deep — and too windy.

"They have to make a fence — 1,000 meters long — along both sides of the course, that if there (is) wind starting we can go into this lane," Hoff said.

Canoeists said they tried to take precautions with the contaminated water, cleaning their paddles and hands and limiting contact with the water.

The lagoon in central Rio registered the highest viral readings in AP's study with a low of 17.3 million viruses per liter, and a high just over 1 billion.

Water experts contacted by AP said a level of 1,000 per liter would be considered "highly alarming."

Carlos Nuzman, head of the Rio organizing committee, said several days ago that viral testing would be done in Rio's waters. He did not say when.

This was a reversal after previously saying — along with the International Olympic Committee — that bacterial testing was sufficient.

Organizers said, however, that they would not move any of the venues no matter what the viral tests showed.

To see the AP's summary findings and methodology of its study on Rio's water quality: http://apne.ws/1IFxS9h