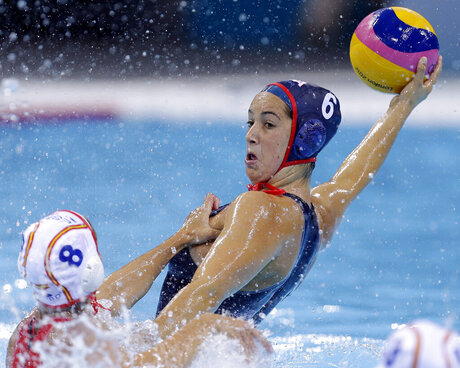 By: JAY COHEN (AP)
CHICAGOCopyright 2020 The Associated Press. All rights reserved. This material may not be published, broadcast, rewritten or redistributed.
41.85-87.65

The fawning players apologized for their pool, and the biggest star of the U.S. women's team flashed back to her start in the sport.

"I was like, 'I played in high school in a shallow-deep pool. Our rival high school, it was exactly like that, wall cages, the goalie was standing,'" Steffens said, "and I was telling them that and they were like, 'No way, like how is that possible that you did that?' ... So I think for me sometimes it's kind of weird being on the other side of it because I looked up to so many people and my dream came true and I got to play with them."

Four years after she powered the United States to gold in London, the home stretch before the Rio Olympics finds Steffens in a much different spot. Once one of the youngest players on the team, now she is one of the leaders. There are all sorts of additional responsibilities that go along with her higher profile, ranging from speaking engagements to her role as an athlete ambassador for the U.S. Olympic Committee.

Steffens, who turns 23 in June, joined soccer star Julie Johnston, wrestler Adeline Gray, fencer Ibtihaj Muhammad and triathlete Melissa Stockwell on an Olympic panel on Wednesday at an espnW event bringing together women in sports to talk about issues in the field.

"That's kind of why you come back, because you don't want that same experience," she said. "You want the same end goal, but you want a different journey, and I think that's what's really fun this time around is that we've kind of created this new family, this new unit of incredible women."

In between her appearances for the U.S. team and catching her beloved Golden State Warriors, Steffens is still pumping in goals at key moments.

Despite being the reigning world and Olympic champion, the U.S. had to wait until last month to grab a spot in Rio. Steffens scored 17 goals as the U.S. went 8-0 on its way to the title at an Olympic qualification tournament in the Netherlands.

The U.S. is drawn into Group B for the Summer Games with Spain, China and Hungary, but Steffens said the team is more focused on its development ahead of the trip to Brazil.

"We have a strong unit, a strong foundation, but we can get better," she said. "We can get stronger and I think that's what's really important about these last months."