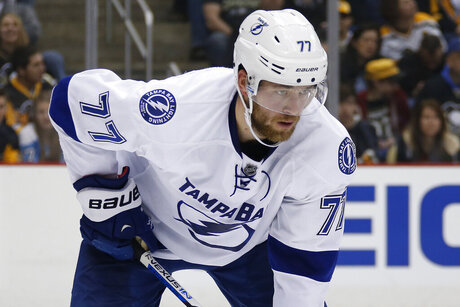 By: STEPHEN WHYNO (AP)
ARLINGTON, Va.Copyright 2020 The Associated Press. All rights reserved. This material may not be published, broadcast, rewritten or redistributed.
38.881-77.1043

ARLINGTON, Va. (AP) — Even as one of the best defensemen in the NHL, Victor Hedman is in awe of Sweden's blue line for the World Cup of Hockey.

Hedman watches two-time Norris Trophy-winner Erik Karlsson and potential future winner Oliver Ekman-Larsson man the power play. He steps onto the ice with Tampa Bay defensive partner Anton Stralman to rekindle the same chemistry that got the Lightning to the Stanley Cup Final in 2015.

And then he sees three-time Chicago Blackhawks Cup winner Niklas Hjalmarsson blocking shots and Mattias Ekholm and Hampus Lindholm moving the puck all over the ice. Sweden's defense may be one of the best units constructed in international play.

"The competition there is, especially on D, it's pretty remarkable," Hedman said. "You look at the guys that didn't make it. You have that kind of talent on the back end, it makes you appreciate being here."

John Klingberg of the Dallas Stars who finished sixth in Norris Trophy voting last season, missed the cut and Sweden is already one injury replacement in after Niklas Kronwall withdrew from the World Cup, which begins Saturday in Toronto. Yet the greatness of the Swedish blue line isn't just in its depth of talent but in its diversity.

Karlsson, the Ottawa Senators' captain, is a point-producing machine who can play 30 minutes a game just like Hedman, a 6-foot-6 force who doesn't give up much skating with his size. Ekman-Larsson of the Arizona Coyotes is a balance of that, someone who has tried to model his game after Hall of Fame countryman Nicklas Lidstrom.

"Obviously we feel very fortunate that we have that many defensemen we can pick from and all kinds of different defensemen, too," coach Rickard Gronborg said. "It feels like we have quite a few players to choose from, and we have excellent players that are not on the team but obviously we've got to make a cut somewhere and these are the guys we feel like we're going to win the battle with when the tournament starts."

Sweden reached the final at the 2014 Sochi Olympics after somehow leaving Hedman and Stralman off the roster and benching Ekman-Larsson. This defense is deeper and more talented — and has the benefit of time.

"I just think we have a little bit more experience," Karlsson said. "Most of the guys that are here played in the Olympics and that was two years ago, and everybody since then has gotten more mature and more experience and become better players, so I think that's why we have a better blue line now than we did two years ago."

Henrik Lundqvist, who was a big part of the run in Sochi and who backstopped Sweden to gold at the 2006 Olympics, said it was hard to rate this group against previous ones he has played on. But the New York Rangers' goaltender appreciates his country's proud heritage on defense, which is becoming a national tradition.

"It's been one of our strengths throughout the years, I think, to have a good D group," Lundqvist said. "I think a lot of D-men growing up in Sweden really learn how to read the game well and play the puck well. They don't just dump it in and go. They really try to make plays. I think every time I come to the national team, you get surprised how well they move the puck and pass the puck."

Canada has Norris winner Drew Doughty, big Shea Weber and other top NHL players on its blue line, but Sweden has the best group of puck movers in the tournament. The power play was impressive in an exhibition victory against Finland on Saturday, and there is still time to tweak things before Sweden plays its World Cup opener Sunday against Russia.

Lundqvist said Sweden is still working on clicking as a unit, which is dangerous for the other seven teams. And there are enough versatile pieces to survive penalties, injuries and for players to be used at their positions of strength.

"I think everybody on the blue line can do everything," Ekman-Larsson said. "We're good skaters, we're really good with the puck. Hopefully we can use that in our favor."

NOTE: Sweden on Monday named Patrik Berglund of the St. Louis Blues to replace sick forward Rickard Rakell on its roster. Rakell has been hospitalized in Gothenburg, Sweden, with an unspecified illness.