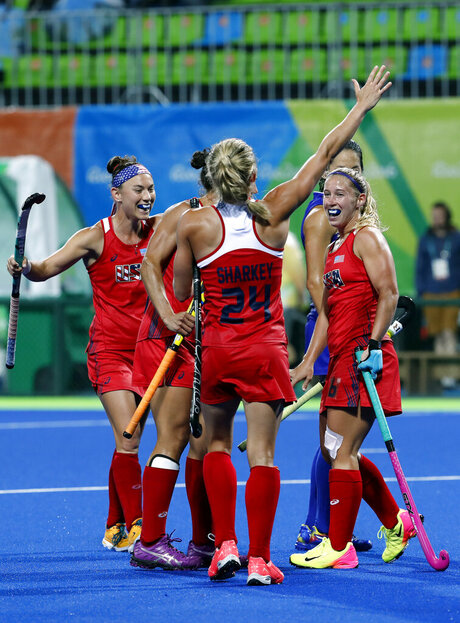 By: CLIFF BRUNT (AP)
RIO DE JANEIROCopyright 2020 The Associated Press. All rights reserved. This material may not be published, broadcast, rewritten or redistributed.
-22.9028-43.2075

Now the head coach of the American women's squad, he recalled why in the moments after a 6-1 rout over Japan at the Olympics last week.

"USA have always had a huge heart, great spirit, great passion, great drive — they never give in," Parnham said. "When I was working with other teams, we would always see those as big threats of the USA, and when you see it firsthand, you see it for what it is."

Just four years ago, those intangible qualities were about all the Americans had going for themselves when they faced elite programs. Parnham's job when the United States hired him in 2013 was to improve the team's skill and fitness and turn the Americans into contenders for major titles. The players bought into his approach, and now the 43-year-old British coach has guided a squad that finished last at the 2012 London Games to a 4-1 record in pool play four years later.

The Americans are in a position to make a run at their first medal since earning bronze in 1984. They play Germany in the quarterfinals on Monday.

The players met shortly after Parnham became coach, and he left them to decide their goals. Once he learned they wanted to rank among the best teams in the world, he put them in position to make that vision realistic.

"He's opened our communication lines," U.S. defender Lauren Crandall said. "He's really allowed us to drive our program. He's given us the power. He's told us, figure out your goals, figure out your vision and drive this bus forward."

Because the players have the power, they correct themselves.

"He creates a culture where the team are accountable," USA field hockey executive director Simon Hoskins said. "I think that really works with today's modern athlete. To me, he really is the epitome of the modern elite coach."

There were plenty of losses along the way. But then, the United States won the Pan American Games in 2015 and finished third in the Champions Trophy event in June. Their No. 5 world ranking is their highest ever.

The United States opened the Olympics with 2-1 victories over No. 2 Argentina and No. 3 Australia, then set a U.S. women's Olympic record with six goals against No. 10 Japan. The Americans beat India, then faltered late to drop their final pool play match to Britain. The United States finished second in the pool and already has set a program high for wins at an Olympics.

"It's been 3½ years of hard work," Parnham said. "We got together and established a program we thought was going to be useful. We've been working on all aspects of our game — physical, mental, technical, tactical. I'm pleased for the team, I'm pleased for U.S. hockey. Things are moving along nicely."