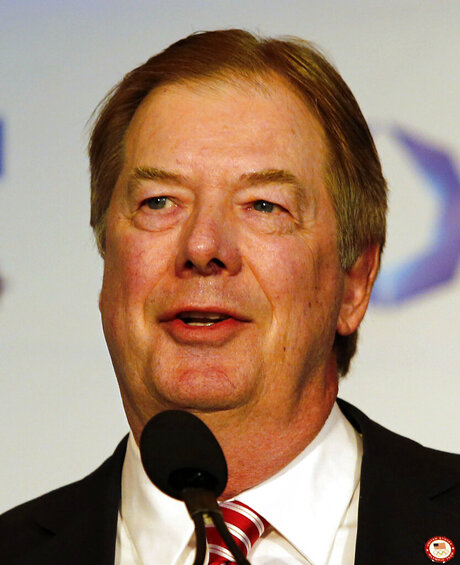 By: EDDIE PELLS (AP)
COLORADO SPRINGS, Colo.Copyright 2020 The Associated Press. All rights reserved. This material may not be published, broadcast, rewritten or redistributed.
38.8339-104.821

COLORADO SPRINGS, Colo. (AP) — The leader of the U.S. Olympic Committee warned of turning the effort to fix the world's broken anti-doping system into a Cold War-style showdown between East and West.

Speaking to the U.S. Olympic Assembly on Thursday, chairman Larry Probst reiterated his support for the International Olympic Committee's near-unanimous rubber-stamping of president Thomas Bach's decision not to ban the entire Russian team from the Rio Olympics.

"If we're going to address the inadequacies of the current anti-doping system, we can't devolve into a Cold War mentality of us versus them," Probst told the audience of U.S. Olympic leaders. "The global system is broken and it needs to be fixed — the sooner the better."

While few dispute the second part of Probst's statement, the idea of framing the Russian doping problem as a political issue certainly plays much better outside the West than inside. The World Anti-Doping Agency and other anti-doping leaders called for a blanket ban of the Russians from Rio after investigations found widespread, state-sponsored doping inside the Russian sports system. Russian President Vladimir Putin has called the doping allegations "a dangerous return to ... letting politics interfere with sport."

Bach, citing the "concept of individual justice" over collective punishment, delivered a decision that allowed 271 Russians — about 70 percent of the country's proposed roster — to compete in Rio. Those athletes collected 56 medals, fourth-most in the Games.

Among those in the room listening to Probst's speech Thursday were Travis Tygart, the CEO of the U.S. Anti-Doping Agency, and Max Cobb, the executive director of U.S. Biathlon. Both wanted a complete Russian ban from Rio. Neither was in a mood to undermine Probst and the U.S. Olympic Committee in what is supposed to be a celebration of a successful Olympics and a look ahead to the bid for the 2024 Olympics.

USADA spokesman Ryan Madden said the agency had no comment.

"I remember Larry Probst saying (earlier this summer), that we don't have a political problem, we have a doping problem," Cobb said. "Anyone who tries to put this in a political light — it's a red herring."

And yet, Probst may not have been speaking only to those in the room.

Shortly before his comments, he played a videotaped message from Bach, in which the IOC president congratulated the U.S. Olympic team for its 121 medals at the Rio Games and for its successes off the field, which included the recent appointment of American Angela Ruggiero to the IOC executive board.

Bach also lauded Los Angeles for what he called a "very strong" bid to land the 2024 Olympics.

With the Rio Games now over, the L.A. bid moves higher on the USOC's list of priorities. The federation has nothing to gain by alienating itself from international partners, and certainly finds no need to rock the boat too hard on the anti-doping front.

Probst said he was looking forward to having a hand in reinventing WADA, and turning it into an agency with stronger investigative powers and the ability to impose fines and sanctions. He will be at an IOC meeting next month during which some proposed changes will be discussed.

Probst reiterated the USOC's recent 20 percent increase in funding to USADA, which remains an independent anti-doping agency tasked with testing and education of American athletes and those who train and compete in the United States.

But the chairman also stayed firm on a point he made over the summer, after raising his hand in favor of Bach's decision not to bar Russia from the Olympics.

"Doping in sport isn't simply the problem of one country," Probst said, "nor can it be solved by targeting one team."