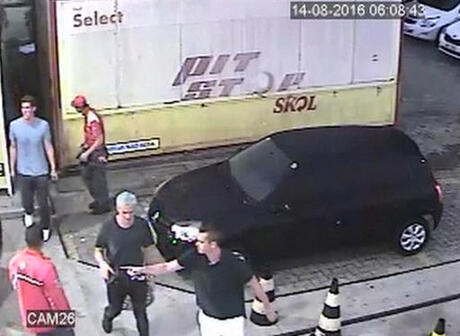 A trashed bathroom. Seized passports. Shifting accounts in TV interviews and social media posts. An encounter with the Brazilian criminal justice system. The saga of American swimmer Ryan Lochte and three teammates during the Rio Olympics has produced a head-spinning series of developments in Brazil and beyond. Here is the latest:

Brazilian prosecutors made a last-ditch effort Friday to increase the amount of money that American swimmer James Feigen would have to pay before leaving the country. A judge allowed Feigen to fork over $10,800 to a Rio charity after police determined he and his teammates weren't robbed but rather vandalized a gas station bathroom early Sunday morning. After paying, Feigen's passport was returned. Prosecutors later appealed the decision and proposed upping the fine to about $47,000. The dispute is largely moot. If prosecutors win their appeal, Feigen would only have to pay if he ever wanted to return to Brazil.

GETTING OUT OF RIO

Feigen took off Friday night on a flight from the Rio airport to the U.S. The trip home for Gunnar Bentz and Jack Conger was a little more eventful. They boarded a plane Wednesday night to leave Rio, but authorities removed the pair from the jet. Police were not satisfied with the swimmers' account of the robbery-that-wasn't incident and wanted more information. Bentz and Conger talked with authorities on Thursday and were whisked through airport security and got on a plane that night. They were greeted back home with yard signs that said "Go Jack" and "Welcome Home."

Lochte took to Instagram Friday and apologized "for not being more careful and candid in how I described the events." At the same time, he stood by the part of his story about someone pointing a gun at him. Bentz issued his own apology later in the day, saying it was an "honor and dream come true" to be on the U.S. swimming team. He also stressed he was only a witness and not a suspect to the events. He provided a fuller account of the ordeal and maintained gas station guards had pointed guns at the swimmers.

Video reviewed by police confirmed the athletes vandalized parts of the gas station, leading to an encounter with station employees. The video shows one of the swimmers pulling a sign off of a wall and dropping it on the ground. A gas station worker arrives, and other workers inspect the damage. Authorities said the swimmers broke a door, a soap dispenser and a mirror while intoxicated after celebrating the final swimming events of the games.

The International Olympic Committee has established a disciplinary commission to investigate the incident involving Lochte and his teammates. IOC disciplinary commissions have the power to issue sanctions. USA Swimming is expected to convene its executive board to discuss likely punishment, as it did when Michael Phelps was arrested for a second DUI two years ago. In addition, police are still deciding whether to bring charges.