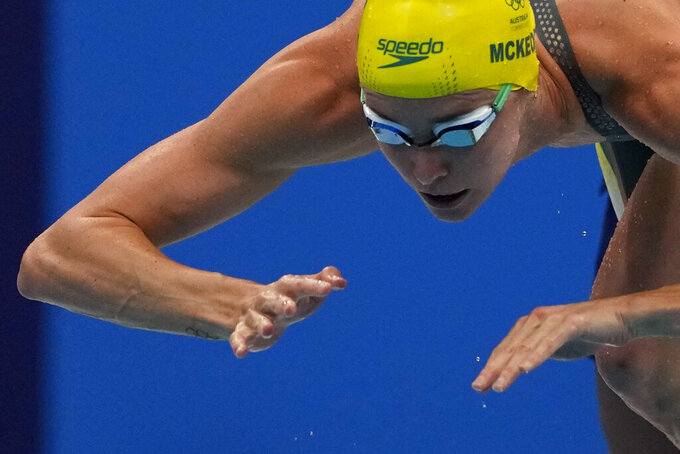 She set an Olympic record to win the 50-meter freestyle in 23.81 seconds, completing the sprint double after her victory in the 100.

Thirty minutes later, McKeon dived back in the pool to win again, this time as part of Australia’s 4×100 medley relay. They trailed the Americans after her butterfly leg, but anchor Cate Campbell sprinted past Abbey Weitzeil to clinch the victory with an Olympic-record time.

“I feel like it has been a bit of a roller coaster getting a gold medal and trying to keep the emotions at bay,” McKeon said. “It will take a while to sink in because I’ve been focusing on myself to keep my cool.”

McKeon leaves Tokyo with four golds and three bronze, tying the record for most medals won by a woman at a single Games set by Soviet gymnast Maria Gorokhovskaya in 1952 in Helsinki.

She became the most decorated Olympian in Australia’s history. McKeon has 11 career medals, eclipsing the record of nine that she shared for one day with swimming greats Ian Thorpe and Leisel Jones.

“I’ve never really looked at the stats of medal counts,” she said. "It is an honor because I know I’ve worked so hard for it.”

The 27-year-old from Brisbane comes from a swimming family. She and her brother, David, were the first brother-sister duo since 1960 to swim for Australia at the Olympics five years ago in Rio. That's where McKeon won four medals — one gold, two silvers and a bronze. Her father, Ron, was a swimmer who runs a learn-to-swim center south of Sydney.

McKeon watched the Olympics as a youngster.

“I grew up wanting to do a similar same thing," she said.

McKeon's efforts on the last day at the Tokyo pool mirrored that of American star Caeleb Dressel. They both won the 50 free and swam the butterfly leg on victorious relays.

McKeon touched in 23.81 seconds in the 50 free. In the medley relay, the Aussies beat the two-time defending champion Americans.

“I don’t know how she does it. I’m exhausted,” said Kyle Chalmers, one of the McKeon’s teammates. “To win one gold medal or an Olympic medal, it’s very, very special. We’re lucky to have her on the team.”