Batsarashkina backs up silver in Rio with gold in Tokyo 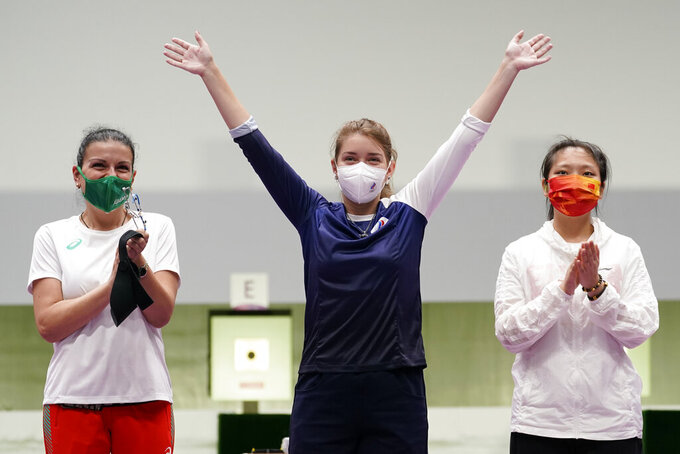 A new era in shooting may be taking off with Vitalina Batsarashkina's second straight medal.

Batsarashkina won gold in women’s 10-meter air pistol at the Tokyo Olympics on Sunday, shortly after Salukvadze said she will not return for a 10th Olympics.

William Shaner added to the United States’ second-day haul at the Tokyo Games, winning the men’s 10-meter air rifle with an Olympic-record 251.6 points.

Batsarashkina just missed gold at the 2016 Rio de Janeiro Games and followed through in Tokyo, shooting an Olympic-record 240.3 points to finish 0.9 ahead of Bulgaria’s Antoaneta Kostadinova.

“I still can't believe I won gold,” Batsarashkina said through an interpreter.

Batsarashkina became the first Russian athlete to win gold and have a Tchaikovsky song play instead of the country's national anthem due to doping sanctions . She officially competed for ROC, the acronym for the Russian Olympic Committee and did not “Russia” on her uniform.

The 24-year shooter will still have plenty more chances to add to her medal haul.

Salukvadze is calling it a career after Tokyo following a decorated career derailed, in part, by eye surgery.

The 52-year-old Salukvadze first competed at the 1988 Seoul Olympics for the Soviet Union, winning a gold and a silver. She added a bronze at the 2008 Beijing Games and became the first mother/son duo to compete at the same games with Tsotne Machavariani in 2016.

Salukvadze had surgery in 2019 and was forced to change eyes for shooting, but still managed to qualify for her record ninth Olympics. She finished 31st in 10-meter air pistol and will compete in 25-meter pistol on Friday.

“I’m not going to try qualifying for the Olympics any more,” she told Russian state news agency RIA Novosti.

Batsarashkina, ranked 10th in the world, was third in qualifying and moved ahead of Kostadinova with a 10.7 with three shots to go. The 25-year-old Russian closed out with a 10.2 to earn the gold she just missed in Rio.

The 35-year-old Kostadinova received a bit of redemption with her silver medal after missing the 2008 Beijing Olympics and being banned for two years after testing positive for cocaine at a World Cup event. She was adamant that she unknowingly ingested the drug, saying someone else was responsible, and returned to the sport in 2010.

Kostadinova had some solid finishes after returning, but was ranked 45th in the world heading into the Tokyo Olympics. She calmed her nerves when she needed it most, holding in the emotions on the shooting range to earn her first medal in her third Olympics.

“Maybe from the outside, people see us as unemotional, but inside there's a lot of emotions and sometimes we couldn't control it,” said Kostadinova, who wiped away tears during several post-finals interviews. “This time, today, I could control my emotions and have a medal for it.”

Jiang was second, 0.9 points behind Batsarashkina heading into the closing shots, but had a pair of 9.2 shots and closed with a 9.0 to finish third.

India’s high expectations for a big medal haul in shooting took another hit when Yashaswini Deswal and Manu Bhaker, ranked Nos. 1-2 in the world, failed to get through qualifying.

The Americans were shut out on the first day, but hauled in six medals in swimming on Day 2.

The 20-year-old Shaner qualified third and was steady in the finals at his first Olympics, boosted by the confidence of winning a World Cup event earlier this year. Sheng Lihao, a 16-year-old Chinese shooter with little international experience, took silver and teammate Yang Haoran earned bronze.

“I was mostly feeling pretty calm," said Shaner, of Rifle, Colorado. "I did my job where I had to. I don’t focus too much on the outcome, I just focus on what I need to do and it went pretty good for me.”

Shaner was one of the top youth shooters in the country and has already had a decorated career at the University of Kentucky, finishing second at the NCAA individual championships and winning team gold in consecutive seasons. He also was a first-team All-American as a freshman.

Sheng has made big strides in a short time, earning an Olympic medal despite getting a late start in shooting at 13.