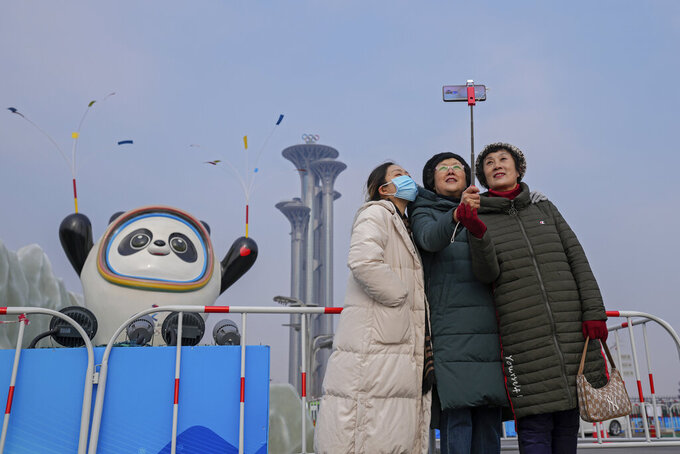 A woman wearing a face mask to help protect from the coronavirus takes a selfie with her companion against a Beijing Winter Olympics Mascot and Olympic Tower in Beijing, Wednesday, Jan. 19, 2022. China has locked down parts of Beijing's Haidian district following the detection of three cases, just weeks before the capital is to host the Winter Olympic Games. (AP Photo/Andy Wong)

BEIJING (AP) — With just over two weeks before the opening of the Beijing Winter Olympics, residents of the Chinese capital say they’re disappointed at not being able to attend events because of coronavirus restrictions that have seen parts of the city placed under lockdown.

Organizers announced Monday that no tickets will be sold to the general public and only selected spectators will be allowed. Access to the famed National Stadium, known as the Bird’s Nest, and indoor venues in the heart of Beijing have been sealed off.

People interviewed Wednesday appeared understanding of the restrictions. Many of them could be seen skating on Beijing's frozen lakes in a sign of continuing enthusiasm for winter sports.

Because China allows no public protests or opinion polling and tightly restricts free speech, any opposition to the Games or the restrictions would be muted.

Chen Lin had planned to buy tickets for speed skating, but gave up over personal concerns about the pandemic and after it became clear that tickets would only be offered to selected spectators.

“I went to the Beijing Summer Olympic Games in 2008. It’s a pity that I won’t be able to watch the Games this time during the Winter Olympics," the 38-year-old said. “Of course, we can still watch the Games with live broadcast on TV and live streaming online, but it doesn’t provide as strong a sense of engagement as watching the Games on the spot."

Beijing is the first city to be awarded the right to host both the Summer and Winter Games.

Chen said the level of excitement this year was far below that of 2008, when the Games brought an outpouring of national pride.

“On the one hand, the Winter Olympics don't get as much attention as the Summer Olympics. On the other hand, there is also the pandemic. Both of them are the reasons,” he said.

Retiree and amateur photographer Wang Shaolan, who volunteered at the 2008 Games, said she had been hoping to take her camera along to events in order to “be part of this."

“But now with the closed-loop management, we won’t be able to be there ourselves. That’s a pity,” Wang said, referring to the restrictions separating participants from the general population.

The recent appearance of the more contagious omicron variant of the coronavirus in Beijing has heightened concerns about outbreaks, although the capital reported just one new case Wednesday.

Elsewhere in the country, around 20 million people are under some form of lockdown and mass testing has been ordered in entire cities where cases have been discovered.

China has largely avoided major outbreaks with lockdowns, mass testing and travel restrictions, although it continues to fight surges in several cities, including the port of Tianjin, about an hour from Beijing.

Restrictions were also tightened in the Henan province city of Anyang south of Beijing, where an additional 29 cases of local transmission were reported Wednesday, out of a national total of 55.

Games organizers have already announced that no fans from outside the country will be allowed.

The Olympics begin Feb. 4, just days after the start of Lunar New Year celebrations. Athletes, officials, staff and journalists are required to enter an anti-pandemic bubble without outside contact and undergo daily testing.

As an additional precaution, Beijing will require travelers to take nucleic acid tests within 72 hours of entering the city starting Jan. 22. Schools in Beijing have also closed early and moved classes online ahead of the winter holidays.

Along with coronavirus worries, the Games have been beset by political controversies, including a decision by the U.S. and its close allies not to send dignitaries in protest over China's treatment of its Muslim Uyghur minority and other human rights abuses.

On Tuesday, athletes were urged by human rights activists to avoid criticizing China because they could be prosecuted.

The International Olympic Committee has said athletes will have freedom of speech when speaking to journalists or posting on social media. However, the Olympic Charter rule that prohibits political protests at medal ceremonies also requires “applicable public law” to be followed.

The IOC has not responded to requests in recent days to clarify how Chinese law could apply at the Games.

“I would like to reiterate that China welcomes athletes from all countries to participate in the Beijing Winter Olympic Games and will ensure their safety and convenience,” Zhao told reporters at a daily briefing.