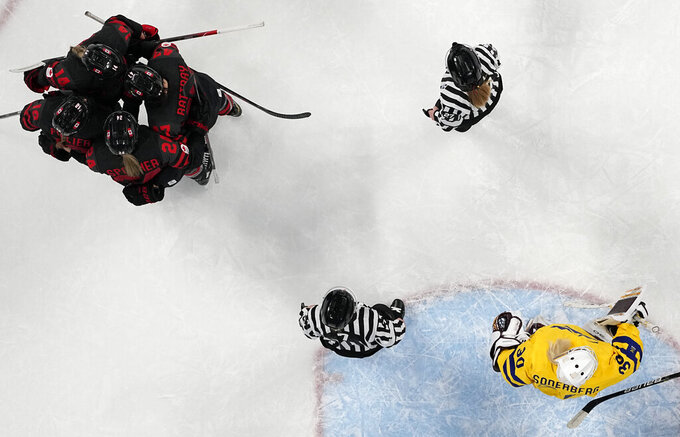 BEIJING (AP) — The Canadians just finished making brisk work of Sweden in the quarterfinal round of the women’s Olympic hockey tournament, and yet coach Troy Ryan wasn’t prepared to assess just how dominant his team can be.

A better time to ask might be Thursday, when the gold medal is awarded.

The Canadians are now considered the favorites, having raised the bar of the women's game with a dynamic and relentless, four-line transition attack that has outscored opponents by a combined 44-5 at the Beijing Games.

“Honestly, we keep things pretty simple in our minds,” said Ryan on Friday, following an 11-0 win over Sweden in which Canada scored five times on six shots during a second-period span of 7:25. “I don’t think we’re reinventing the wheel at all.”

But the Canadians, in three-plus years under Ryan, are reinventing themselves following the lowest points in their proud history.

The downturn began with a gold-medal loss to arch-rival United States at the 2018 Winter Games, which ended Canada’s run of four Olympic championships. The following year, the Canadians settled for bronze in failing to reach the world championship final for the first time in tournament history.

The losses led to Ryan and his staff transforming what had been both a stale team culture and style of play.

They made the game fun again by placing a focus on speed and transition to increase offense and complement the strengths of the ultra-talented pool Canada draws from. And with that, came an emphasis on not being afraid of making mistakes.

“We’ve got to be OK with the mistakes, because one of the things we talked about was how do you improve your game if you don’t leave a little room for error?” he said.

The change paid off at the world championships in August, when Canada’s 3-2 overtime win over the U.S. in the title game ended the Americans’ run of five tournament titles.

Ryan’s strategy centers on using Canada’s play-making defenders to exit the zone as quickly as possible — accepting the risk of turnovers to keep opponents on their heels.

“I think we had become a little robotic in the way we played,” said Natalie Spooner, who leads the tournament with 13 points (three goals, 10 assists). “The quicker we play on defense, the quicker we get the puck out, let’s us play offense and let’s us do our thing.”

Canada will face Switzerland, and the U.S, coming off a 4-1 quarterfinal win over the Czech Republic, will play Finland in the semifinals on Monday. Both games are preliminary round rematches after Canada defeated the Swiss 12-1, and the Americans beat Finland 5-2.

Finland advanced with a 7-1 win over Japan on Saturday, with Petra Nieminen scoring three goals and adding two assists. In Switzerland’s 4-2 win over the Russian Olympic Committee, Alina Muller converted Lara Stalder's pass on a 2-on-1 break to score the go-ahead goal with 2:37 remaining in regulation and then added an empty-netter.

The Canadians have dialed it up a notch after a four-month leadup of practices and games that allowed them to polish their chemistry.

Canada leads the tournament in scoring efficiency with 44 goals on just 250 shots, and power-play efficiency in converting 10 of 20 chances. Canada’s 4-2 win over the U.S. last week matched the most the team has ever scored against its cross-border foes in Olympic play.

Meanwhile, Canadians Brianne Jenner and newcomer Sarah Fillier are tied for the tournament lead with eight goals each, one short of matching an Olympic record set by Canada’s Meghan Agosta and Switzerland’s Stephanie Marty at the 2010 Vancouver Games.

“Being able to score as many goals as we have, and scored in so many different ways really gives us confidence,” forward Blayre Turnbull said. “Some of us definitely played a bit more of an uptight game where we were gripping our stick and just thinking about mistakes. We’ve done a big 180 as a program.”

The change is night and day for goalie Ann-Renee Desbiens, who actually quit playing hockey after 2018 because she no longer enjoyed it. She attended Wisconsin to get her master's degree in accounting, where Desbiens doubled as a goalie coach for the Badgers women’s team.

Coaching and the change in Canada’s culture lured her back.

“I think you see the fruits by seeing all the smiles on the ice,” said Desbiens, who has allowed four goals on 97 shots in three games. “Troy’s done a good job of creating a safe environment and making sure that all the players can play to their best ability and not have to hold on to their sticks too tight.”