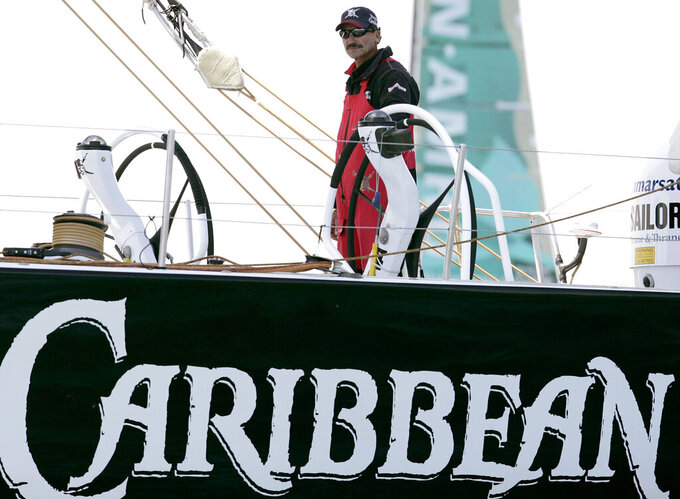 FILE - In this April 29, 2006, file photo Paul Cayard, skipper of the Pirates of the Caribbean Volvo Ocean Race boat steers his boat as they team readies for the start of the Baltimore in Port race on the Chesapeake Bay. Cayard has raced in the America's Cup, the Olympics and was the first American skipper to win one of sailing's toughest challenges, the Whitbread Round the World Race. Now he faces another arduous task, guiding the underperforming U.S. Olympic sailing team as its new executive director. (AP Photo/Chris Gardner, File) 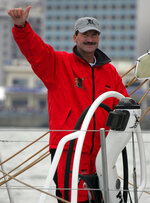 SAN DIEGO (AP) — Paul Cayard has raced in the America’s Cup and the Olympics, and was the first American skipper to win one of sailing’s toughest challenges, the Whitbread Round the World Race.

The United States has won just one sailing medal in the last two Olympics combined, a startling result for a country that used to dominate the podium. Americans failed to medal in the 2012 London Games, their first whitewash since 1936. They avoided a second straight shutout in 2016 thanks to Caleb Paine, who won the bronze in the Finn class.

Cayard takes over just four months before the rescheduled Tokyo Games, but says a turnaround is going to take much longer. His long-term goal is to dominate the podium at the Los Angeles Games in 2028.

“It’s going to be a steep hill. But then again, satisfaction is proportional to the steepness of the hill,” Cayard said in a phone interview. “If we do it, it’ll be a very satisfying accomplishment.”

Cayard said the United States has the talent and “it’s just not right” what’s happened at recent Olympics.

“America deserves to be fighting it out with Great Britain and Australia and New Zealand, not down in 10th place. That’s my main motivation, and I’ve been close to the Olympics,” he said.

The United States has won the most Olympic sailing medals in history, 60, but the well-funded British have quickly pulled within two and lead the Americans in gold medals, 28 to 19.

Cayard was an alternate at the 1984 Los Angeles Games, when the Americans won three gold medals and four silvers. “The worst we did in ’84 in any of the seven classes was silver,” Cayard said. “The guys who got silver felt bad, because all we got was gold and silver.”

He competed in the Star class in Athens in 2004, finishing fifth.

The 61-year-old Cayard feels he’s at the stage in his life where he can put all his varied experiences together and do something good with it.

“I like projects. And LA 2028 is a great goal post,” he said. “I think seven years is still going to be hard to do, but it’s a realistic goal post and it’s a very convenient one because we’ll once again be back in LA where we dominated in ’84.

“We just all need to rally around and bring America’s best to bear. And if we do, why wouldn’t we be the best country in the world?”

Cayard was a volunteer member of the U.S. Olympic Sailing Committee for the last four years and said there’s “a systemic problem” with the organization and funding. “We’re never really going to get anywhere unless we address some very big issues,” he said.

“In the United States of America we have everything. We have it all, but we have not been successful in bringing it to bear in a coordinated and impactful way,” he said. “It’s pretty clear to me what we’ve got to do and I’m hoping to rally the support of many to make it happen.”

Cayard said that until 1992, Olympic sailing was “bring your own,” meaning sailors bought their own boats, put together a crew, figured out their training program and paid their own travel costs.

“When everybody was playing ‘bring your own,’ we were the best, Cayard said.

He said that changed in the 1990s when countries such as Britain started relying on government funding.

“They got fed up and a lot of these countries got professional in their organization, in their funding and just provided a much better support system for their athletes,” Cayard said. “It’s not that they’ve got better athletes, it’s just that they trained them better and we didn’t. We’re still playing bring your own. You just rely on the athletes to figure it out.”

Cayard wants to build a proper training base in Long Beach, the venue for the 2028 LA Games. And he said it will cost $75 million to $80 million to get where he wants to be in 2028. By comparison, the New York Yacht Club’s American Magic spent an estimated $150 million on the most recent America’s Cup and was the first challenger to be eliminated, without having won a race.

The San Francisco native is a seven-time world champion, competed in seven America’s Cup campaigns and twice circumnavigated the globe, including winning the Whitbread Round the World Race — now the Ocean Race — in 1998. He was Rolex Yachtsman of the Year in 1998 and was inducted into the National Sailing Hall of Fame in 2011.

The previous head of U.S. Olympic Sailing, Malcolm Page — who won two gold medals for Australia — was forced out in September 2019.