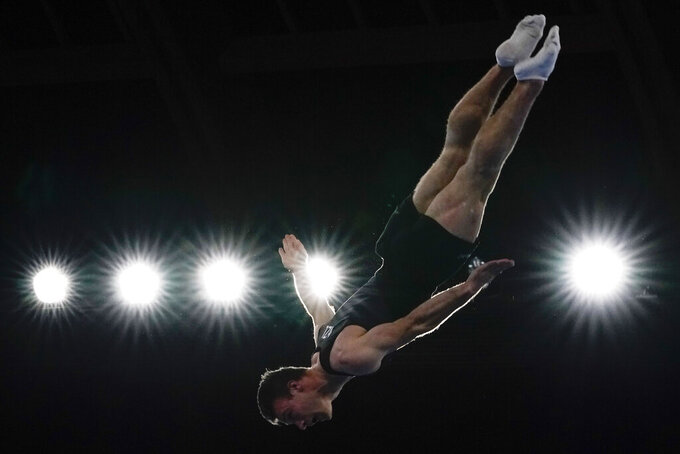 Dylan Schmidt, of New Zealand, competes in the in the men's trampoline gymnastics qualifier at the 2020 Summer Olympics, Saturday, July 31, 2021, in Tokyo. (AP Photo/Ashley Landis)

TOKYO (AP) — Every time Nicole Ahsinger’s toes leave the trampoline and she begins her ascent, she gets a twinge of terror at the realization that she is about to elude the Earth’s gravitational pull.

Ahsinger, an American trampolinist, is among the small contingent of Olympians whose sport is to fly.

“You know when you’re on a roller coaster and you’re about to drop, your heart drops a little bit and you get the butterflies? That’s what it feels like every time I jump,” she said. “I get that little ounce of, ‘Hey, is my body supposed to be doing that?’”

Trampolinists shoot sometimes 26 feet up — higher than a two-story building. In Tokyo’s arena, halfway between the floor and the rafters, they flip, twist, turn, and land back on a trampoline smaller than a parking space. Then they immediately soar skyward again.

It all happens in seconds. A routine of 10 jumps, each demonstrating a different trick in the air, lasts less than a minute.

At the trampoline competition in Tokyo, an announcement in the arena wondered: “How far can humans defy gravity?”

The spectacle stretched over two days: the women on Friday and men on Saturday. Ivan Litvinovich of Belarus claimed the men’s gold medal. In the women’s competition, China won both gold and silver: Zhu Xueying got first place and Liu Lingling was second.

“It does feel like flying,” said Bryony Page, a British trampolinist who won the bronze medal Friday in Tokyo and the silver in the 2016 Olympics. “It’s almost like you’re driving your own roller coaster.”

The trampolines in Tokyo are perfect, she said. They are powerful and extra bouncy. She wished she had one just like it at home.

Their sport was conceived at the circus.

In 1934, an American gymnast named George Nissen went to a circus and was awed that the acrobats tumbling into safety nets used the bounce from the net to propel themselves into their next trick. Nissen built the first trampoline and, early on, his invention was used to train astronauts.

It was added to the Olympics for the 2000 Games in Sydney.

To watch from the stands is terrifying; spectators gasp when it appears an athlete might be spinning awry.

If they flip too much or too little they can land out of control with the force of falling from the top of a two-story building. They spin onto the pads at trampoline’s edges — just a couple feet of cushion separating them from the hard floor and the ordinary consequence of gravity.

Sometimes they are terrified, too. As she plummets back toward the ground, Ahsinger, who finished sixth, said she occasionally is overcome with fear. It’s as if her brain doesn’t understand how her body could do what it’s doing.

Page, the British gymnast, has been public about her struggle with what aerial athletes call lost-move syndrome, in which they forget, sometimes mid-air, how to do the skills they’ve always done automatically.

She has described panicking upside down as she plunged back toward the trampoline. She had to slowly retrain her skills — and also her mind — to override the anxiety.

It is not uncommon for trampolinists to experience this phenomenon and many competing in Tokyo said they felt intense admiration for Simone Biles, the American superstar in trampoline’s sister sport, artistic gymnastics.

Biles withdrew from the competition because she said mental health struggles were making her routines, the most difficult in the world, extremely dangerous. Gymnasts call it the “twisties” — Biles kept telling her body to twist but it had somehow forgotten how.

“When you get lost in the air, it’s one of the most terrifying experiences you can have,” said two-time Olympic gold medal trampolinist Rosie MacLennan of Canada, who struggled with a similar episode while training for the 2016 Olympics. She worked through it and won gold but said Friday that the terror of that time remains with her.

Still, she loves the feeling of flying.

“We get to project ourselves really high in the air and flip around,” said MacLennan, who narrowly missed another trip to the podium Friday and finished fourth. “It’s a pretty incredible feeling especially when you do a skill for the first time, there’s this adrenaline rush and a sense of accomplishment.”

There is little room for error. In artistic gymnastics, if an athlete falls they can get back up and hope the rest of their routine is good enough to make up some of the points they lost for the mistake. But not in trampoline: If a gymnast careens out of bounds, that’s the end.

At the men’s qualifying competition Saturday, American Aliaksei Shostak landed wide and his leg thrust through the springs. He pulled it out, unhurt, and climbed off the trampoline. He wasn’t scared, he said.

“I was in shock,” he said of his disappointing stumble, which disqualified him from finals.

Shostak describes the feeling of catapulting his body into the air as akin to being weightless.

But despite that wonder of flight, trampoline doesn’t get much attention in most of the world.

Dylan Schmidt, of New Zealand, said he hoped the bronze medal he’s bringing home from his performance Saturday might get the sport more notice in his home country.

"It’s really fun up there in the sky, said Schmidt, who describes himself as an “adrenaline junkie.”

“It’s hard to explain, I don’t really feel much, it’s all a bit of a blur while I’m doing it,” he said. “It goes by in a flash. We compete for like 25 seconds, but it feels like less when you’re on a trampoline.”