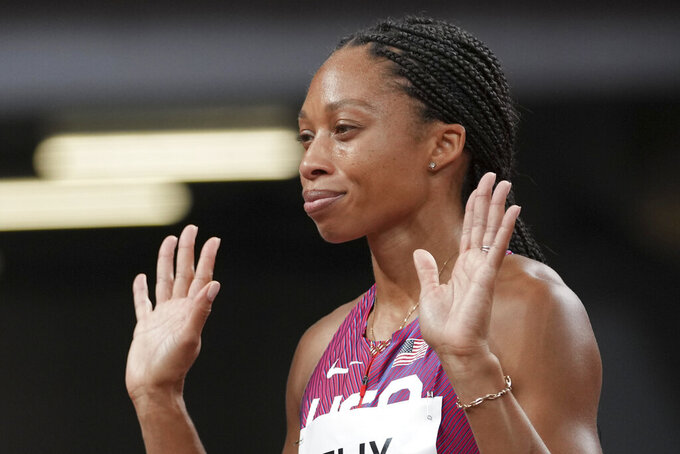 Allyson Felix, of the United States, reacts prior to the start in a semifinal of the women's 400-meters at the 2020 Summer Olympics, Wednesday, Aug. 4, 2021, in Tokyo. (AP Photo/Matthias Schrader)

TOKYO (AP) — Set the alarm for Day 14 of the Tokyo Games and watch Allyson Felix attempt to win a 10th track and field Olympic medal over breakfast. Then stay up late to catch the U.S. men's basketball team play for the gold.

Most of Friday's high-profile events are early, including the jumping team event at Tokyo’s Equestrian Park. Jessica Springsteen, daughter of Rock and Roll Hall of Famer Bruce Springsteen and his E Street Band wife, Patti Scialfa, will attempt to win her first Olympic medal.

Allyson Felix came to the Tokyo Games chasing history. The track star has nine medals across four Olympics, most of any woman in U.S. track and field history.

One more medal would give her 10 — enough to tie Carl Lewis' overall Olympic record and pass Merlene Ottey of Jamaica for most in women's track and field. Felix will run in the finals of the 400-meters, but at 35-years-old, she knows the task will be difficult.

“You get older,” said Felix, “and it seems like it’s harder.”

France made sure the U.S. wouldn’t win a medal at the 2019 Basketball World Cup, then beat the Americans again to open the Tokyo Games.

If France beats the U.S. for a third consecutive time, the country will take over as Olympic champions.

The rematch is set: France and the U.S. play for gold, and France has made it this far in the Olympics only twice before, falling to the U.S. in the gold-medal games at Sydney in 2000 and at London in 1948.

The Americans are bidding for a fourth consecutive gold medal, and Kevin Durant can join Carmelo Anthony as the only U.S. men with three basketball golds.

No nation has ever defeated the U.S. men twice in the same Olympics. The only nation to do it twice, ever, was the Soviet Union. The game will be aired live on NBC at 10:30 p.m.

Jessica Springsteen failed to qualify for the individual jumping finals at Tokyo’s Equestrian Park in her first Olympic Games, but the daughter of Bruce Springsteen can still medal in the jumping team event.

The 29-year-old will be part of America’s four-rider entry.

The U.S. won the event at the FEI World Equestrian Games in 2018 and will be seeking a record fourth Olympic gold medal in the team jumping event. The Americans have won a record nine Olympic medals in the team jumping event, including silver at the Rio Games. Qualifying will be shown in NBC Sports Network afternoon coverage that begins at 11 a.m., as well as coverage on NBC that runs noon to 5 p.m.

Greece plays Hungary and Serbia takes on Spain in the semifinals of the men’s water polo tournament.

Each game is a rematch from the first day of group play in Tokyo. Spain beat Serbia 13-12 in their first matchup, and Greece held off Hungary for a 10-9 win.

Greece is one win away from its first men’s water polo medal at the Olympics. Serbia is looking for its second straight title after it won in Rio de Janeiro in 2016. Coverage of Greece vs. Hungary is live on CNBC starting at 2:30 a.m., with additional coverage Friday afternoon on NBC Sports Network.

South Korea plays Dominican Republic in the bronze medal baseball game to be aired live on CNBC at 11:30 p.m.

The U.S. beat South Korea to send the defending champions into the bronze medal game.