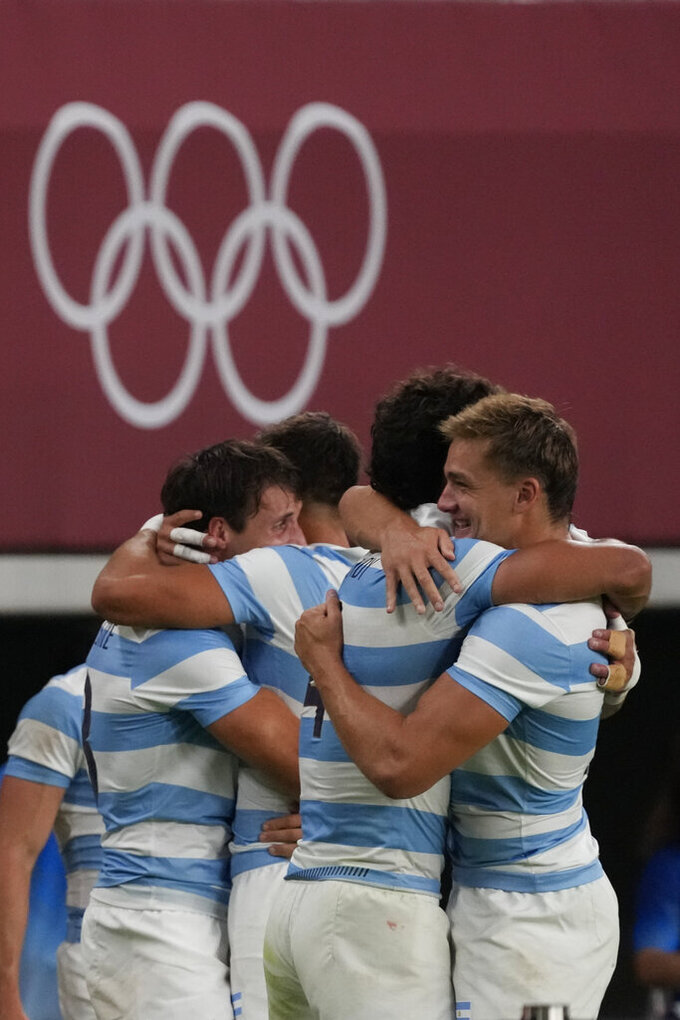 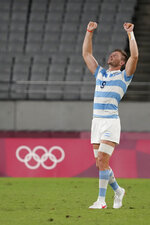 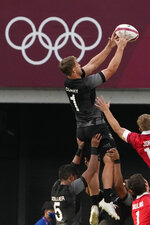 TOKYO (AP) — Siviwe Soyizwapi and his beleaguered Blitzboks arrived at the Tokyo Olympics without their head coach, and they'll be leaving without a medal.

The South Africans won the bronze medal when rugby sevens made its Olympic debut at Rio de Janeiro five years ago, finishing behind champion Fiji and Britain.

The two 2016 finalists are into the final four, with defending champion Fiji capping Day 2 with a 19-0 win over Australia to continue its unbeaten streak in Olympic competition and Britain turning around a 21-point deficit to edge the United States 26-21.

Top-ranked New Zealand reached the final four with a 21-10 win over Canada.

But with head coach Neil Powell watching on TV from quarantine because of a pre-tournament positive test for COVID-19, South Africa struggled in a 19-14 upset loss to an under-strength Argentina in the quarterfinals on Tuesday after finishing the group stage with three wins.

“Argentina came and forced their will and style of play on us, and we allowed it to happen,” Soyizwapi said. “Our heads are down at the moment — we have let ourselves down. We made silly mistakes. We did not keep our standards.”

Selvyn Davids opened the scoring for South Africa before Argentina had a player sent off in the third minute, giving up a one-man advantage. Far from wilting, Argentina rallied with two tries from Marcos Moneta and another from Santiago Alvarez to take a 19-7 lead.

The South Africans were awarded a late penalty try to cut the margin to five points with less than 30 seconds to play, but ran out of time.

The Argentine players hugged and whooped it up on the field, the celebratory noise echoing around an empty stadium.

“We had a tough match with the red card and also the last minute we had two less, because of a yellow card,” Moneta said. "We demonstrated what we can do as a team by winning and going to the semifinals.

“We're going to leave everything on the field to get our flag at the top of the podium.”

They'll next play a Fiji lineup which has been in camp for several months, in bio-secure bubbles at home, in Australia and in Japan, because of a coronavirus outbreak on their Pacific island nation.

“We are suffering a lot with the pandemic right now and that’s what matters to us," Fiji captain Jerry Tuwai said. “As the world knows, rugby is the national sport of Fiji. Defending the gold would be something else — I think we would forget about the pandemic."

The All Blacks sevens team was eliminated in the quarterfinals in 2016 and is desperate to make amends in the medal rounds on Wednesday. The New Zealanders had a comeback win over Australia to secure first place in their group, then scored the first 21 points against Canada to take control of the quarterfinal.

The U.S. scored the first 21 points against Britain, including a pair of Perry Baker tries, and appeared ready to enter the medal round but conceded four straight tries.

Britain lost to Fiji earlier in the morning session to finish second in Pool B and, for at least half of the quarterfinal match, was on the verge of another defeat.

“Pretty unreal when you’re down like that,” British player Robbie Fergusson said. “We could have been down and out at halftime, but the resilience in the second half is what we’re all about.

“When our backs are against the wall, we seem to be at our best.”

The best the United States can finish now is fifth.

“That’s a heartbreak, especially to lose a lead like that," American player Joe Schroeder said. “That hurts.”

That’s how South Africa captain Soyizwapi described his team’s loss to Argentina, too.

It was yet another setback for his squad, which was held at a quarantine facility initially after arriving in Japan because of a positive coronavirus test involving their flight, and was later divided into two smaller groups before relocating to Tokyo. Powell, the head coach, stayed in isolation.

“It really hurt. It was a massive blow to lose the coach — he’s the leader of the team,” Soyizwapi said. “We tried to make it work without him, but unfortunately we couldn’t go all the way.”

United States coach Mike Friday said his players were “gutted” at the loss to Britain but were on the right path after placing ninth in Rio.

“Sevens is brutal," he said. “Little moments, little referee calls either go your way or don’t go your way and that’s the difference between being in the medal rounds tomorrow.”