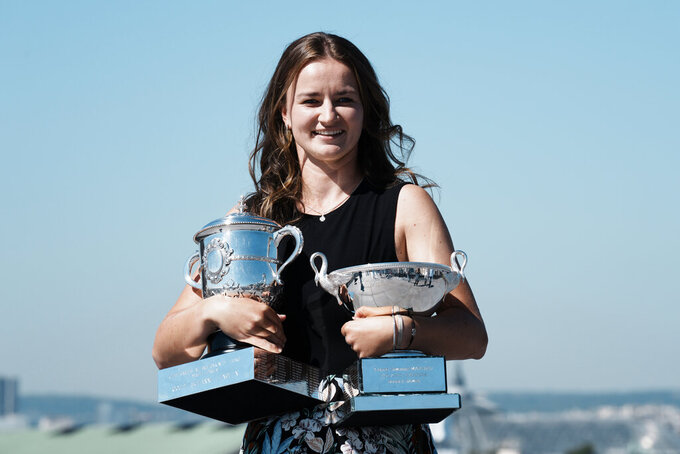 French Open champion Barbora Krejcikova's twin titles at Roland Garros earned jumps in the WTA rankings to No. 15 in singles and No. 1 in doubles.

The women's and men's rankings released Monday determine which players are eligible to compete at the Tokyo Olympics, which start next month. Each country can send as many as four women and four men in singles, and 17-year-old Coco Gauff rose two spots to a career-best No. 23, which makes her the fourth-highest woman from the United States.

Tsitsipas went up one spot to No. 4, his best, swapping places with 2020 U.S. Open champion Dominic Thiem.

Daniil Medvedev stayed at No. 2, followed by Rafael Nadal. Roger Federer is No. 8.

Roberto Bautista Agut rejoined the Top 10 by rising one notch from 11th; Diego Schwartzman slid from 10th to 11th.

Krejcikova, a 25-year-old from the Czech Republic, is the first woman since Mary Pierce in 2000 to win both singles and doubles trophies in Paris.

Krejcikova rose 18 spots from 33rd in singles to a career high after beating Anastasia Pavlyuchenkova 6-1, 2-6, 6-4 in Saturday's final for her first Grand Slam singles title. In doubles, she went from No. 7 to return to the top spot, which she first occupied in October 2018, after teaming with Katerina Siniakova to defeat Iga Swiatek and Bethanie Mattek-Sands 6-4, 6-2 on Sunday for their third major championship as a duo.

The unseeded Krejcikova was participating in only her fifth main draw at any Grand Slam tournament in singles; she'd once been as far as the fourth round previously. But she eliminated a string of seeded players, including Gauff, Pavlyuchenkova, Elina Svitolina and Maria Sakkari.

Pavlyuchenkova's first appearance in a major final — she had been 0-6 in quarterfinals previously — allowed her to go from No. 32 to No. 19.