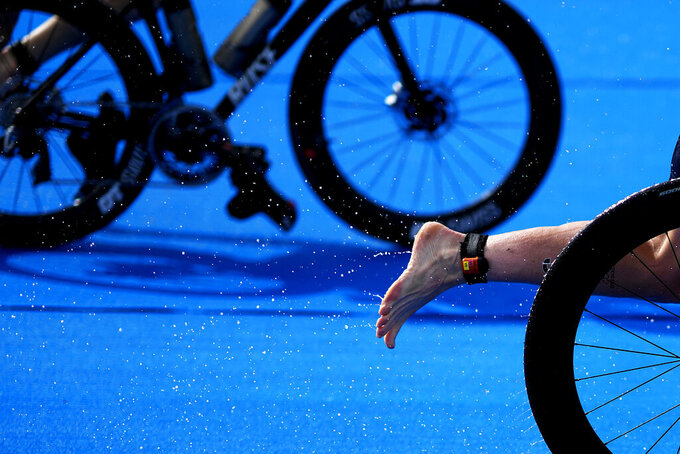 Water comes off the foot of Jessica Learmonth, of Britain, as she transitions in the rain from the bike to the running leg during the women's individual triathlon at the 2020 Summer Olympics, Tuesday, July 27, 2021, in Tokyo. (AP Photo/David Goldman)

TOKYO (AP) — It's easy to think of the Olympics as epic, as a collection of significant moments stitched into a grand and thrilling narrative. And the Games are often certainly that. But sometimes the genius is in the details — not even the details of actual competition, necessarily, but the tiny things that happen in passing.

In Associated Press photographer David Goldman's case, the wet foot of Britain's Jessica Learmonth tells its own story Tuesday as she transitions in the rain from the biking leg of the women's individual triathlon to running.

For AP photojournalist Dita Alangkara, the act of reaching for a shuttlecock, captured with the hand of Taiwan’s Tai Tzu Ying during her match against Qi Xuefei of France on Wednesday, reveals a fleeting interaction with badminton gear that captures the larger whole.

The big moment and the tiny detail: A trained photojournalist is ready to capture both at a moment's notice. For that, the Olympics provide some of the most intriguing canvases of all.