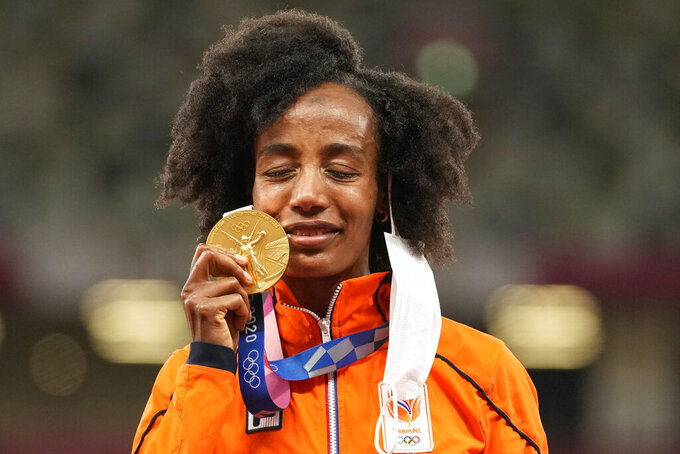 Gold medalist Sifan Hassan, of Netherlands, reacts during the medal ceremony for the women's 10,000-meters at the 2020 Summer Olympics, Saturday, Aug. 7, 2021, in Tokyo. (AP Photo/Martin Meissner)

TOKYO (AP) — By the time she reached the 65th and final lap of her eight-day Olympic odyssey, Sifan Hassan's neck had seized up and she couldn't turn her head. She could barely breathe and she couldn't feel her arms anymore.

As she neared the end, she couldn't see properly and thought “why did they move the finish line?”

Her legs knew right where it was.

Deep into her sixth race across three distances that covered more than 24 kilometers on Tokyo's sweltering Olympic track, Hassan burst past world-record holder Letesenbet Gidey to win the 10,000-meter gold on Saturday.

“I have never gone deep like I have gone today,” said Hassan, who was born in Ethiopia and left when she was a teenager to settle as a refugee in the Netherlands.

After the 10,000 win, Hassan was crying on the medals stand. Crying for the wins, but also for something else.

Gone now, Hassan said, were the “stupid nightmares” that kept waking her as she fretted over whether she'd made a disastrous decision to try all three events.

Who else would think of such a thing?

“There's something wrong with me,” she said. “But I am really happy. Grateful.”

Hassan had run three 1,500- and two 5,000-meter races by the time she lined up against Gidey for Saturday's start. She'd also tripped over another runner in one of her 1,500 qualifying rounds and had to pick herself and sprint the last lap to win and keep her quest for the triple alive.

Her last obstacle was Gidey, who holds world records in the 5,000 and 10,000, and was fresh — here for only one race and hoping for only one gold medal.

Gidey led for much of the race, with Hassan tucked in behind her. As they came out of the last turn of the last lap, Hassan commanded her legs to go one more time. They did, and Gidey — slightly thrown as Hassan launched her attack while they approached a bunch of lapped runners — had no response.

Hassan won in 29 minutes, 55.32 seconds. Kalkidan Gezahegne also passed Gidey for silver, with Gidey holding on for the bronze.

Hassan said she knew she'd won, but not much else registered. What happened just before and just after the finish line was a blur.

“Then, I wanted to celebrate," she said. "But when I finished I just fell down. I couldn’t breathe.”

Hassan lay on her side on the track as a medic applied an ice pack to her neck and to the side of her head. But it lasted just a minute or two. She soon bounced back to her feet and draped a Dutch flag over her shoulders, ready for her third round of celebrations.

Fanny Blankers-Koen is the only other woman to win three individual track medals at an Olympics. It was a relative breeze for the Dutch sprinter in the 100, 200 and the 80-meter hurdles (she also won a gold in the 4x100-meter relay). Not since the days of the great Emil Zatopek has a distance runner clinched three individual medals. Zatopek incredibly got golds in the 5,000, 10,000 and marathon at the 1952 Helsinki Olympics.

In more recent times, a 5,000-10,000 double was considered the limit for the greats — runners such as Mo Farah, Kenenisa Bekele and Tirunesh Dibaba.

Hassan ran the 1,500-10,000 double and won both at world championships two years ago in Doha, Qatar.

Hassan said running during her formative days in school was how she burned off her “excess energy.”

That has stayed with the 28-year-old through her career. Amid her hectic schedule, Hassan also squeezed in a few training runs in Tokyo, as if six top-class distance races at the Olympics weren't enough.

Would she bother going for another run on Sunday?