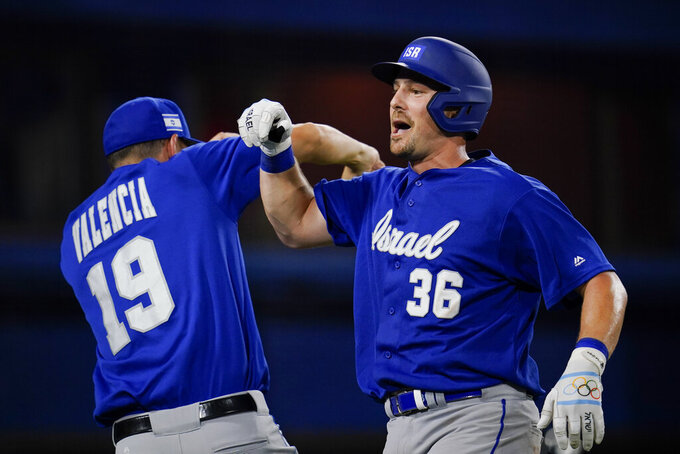 YOKOHAMA, Japan (AP) — Most of the Olympics is a competition among the best in each sport. Israel's fate in its baseball debut came down to a pitcher whose last professional game was nearly 23 months ago.

It didn't work out.

The 34-year-old left-hander has been working as a front office assistant for the Pittsburgh Pirates, focusing on defensive shifting and positioning. His last professional game was Sept. 1, 2019, for Triple-A Rochester at Syracuse.

“I don't think rust had anything to do with it,” Israel manager Eric Holtz said. “Jeremy has been working hard throughout. The Pirates organization has been wonderful with him. And he's been throwing live to batters two to three times a week. So I don't think there was any rust. I think the ball just got away.”

On a night when Ryan Lavarnway homered twice for Israel and Ian Kinsler also went deep, South Korea overcame 2-0 and 4-2 deficits, and Israel rallied from down 5-4.

Bleich entered to start the 10th. Under international rules, extra innings start with runners on first and second, an even bigger distortion than the controversial major league runner on second pandemic rule used in 2020 and this season.

Jaegyun Hwang sacrificed, and Ji Hwan Oh popped out to Ty Kelly, who made an over-the-shoulder catch in short left field.

Bleich (0-1), whose big league career consisted of two games for Oakland in 2018, hit Kyoungmin Hur on the rear, then brushed the jersey of Euiji Yang with his next pitch.

Kinsler had taken a called third strike that ended the top of the 10th against former St. Louis, Toronto and Colorado reliever Seunghwan Oh (1-0), who struck out the side to give four South Korean pitchers 17 strikeouts.

Major League Baseball refuses to make 40-man roster players available and many teams refuse to let top eligible prospects play. Several players have said they hope the Olympics serves as a showcase that gets them signed for major league stretch runs.

Japan, which opened Group A with a win over the Dominican Republic, does have most of its top players after the Central and Pacific Leagues stopped their seasons.

The United States opens Group B on Friday against Israel (0-1) and plays South Korea (1-0) on Sunday.

“For me the opportunity to represent Israel connects me with my Jewish identity,” Lavarnway said. “That's something everyone on this team has in common. We're all Jewish. And that's how we qualified for citizenship, since we didn't grow up there. But it's extremely meaningful to me, and I feel like we're representing both Israel and Jewish people around the world.”

Kinsler's two-run homer in the third off Taein Won and Lavarnway's two-run drive in the sixth on a slider from Wonjoon Choi built a 4-2 Israel lead.

Ji Hwan Oh tied the score 2-all with a two-run homer off Jake Fishman in the fourth, and June Hoo Lee and Hyunsoo Kim hit consecutive home runs in the seventh that tied the score against Zack Weiss, a 29-year-old right-hander whose big league career lasted four batters for Cincinnati on April 12, 2018.

Ji Hwan Oh's RBI double, his third hit of the game, put South Korea ahead 5-4 in the three-run seventh, but Lavarnway homered off Oh (1-0) in the ninth on a fastball nearly shoulder high. Lavarnway was 3 for 11 for Cleveland in June while Austin Hedges was on the concussion injured list.

Israel starter Jon Moscot left after nine pitches due to an elbow injury, giving up a leadoff single to Hae Min Park and walking off the mound after a 2-2 pitch to Lee. The 29-year-old right-hander made eight appearances with Cincinnati in 2015-16 before Tommy John surgery.

“I don't know that there could have been a bigger game-changer when you've sat for months planning a pitching rotation, what guys are going to be up against what teams, and arguably one of our best guys goes down in the first inning without recording an out,” Holtz said. “Plan B was all hands on deck.”

Moscot was replaced by Fishman, the first of five relievers. The 26-year-old left-hander, taken by Miami from Toronto in the Triple-A phase of last year’s winter meeting draft, caused difficulty for a mostly left-handed South Korean batting order.

Holtz remained upbeat. The team's goal, he said, was to “try to make the world understand that Israel belongs here.”

“This is not a fluke,” he said. "Israel can play baseball.”