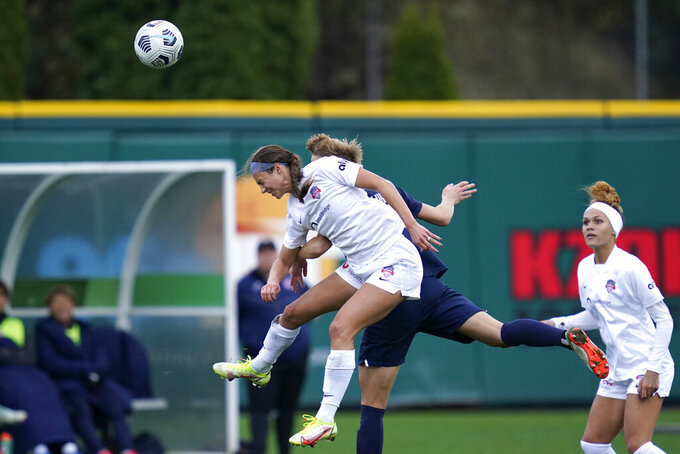 Washington Spirit forward Ashley Hatch, left, heads the ball in front of OL Reign midfielder Quinn in the second half in the semifinals of the NWSL soccer playoffs Sunday, Nov. 14, 2021, in Tacoma, Wash. (AP Photo/Elaine Thompson)

But several experts say the framework of 10 principles, released by the IOC this week, likely can still be used to restrict the eligibility of trans women.

The IOC said the framework which updates 2015 guidelines introduces a more evidence-based approach to eligibility which requires proof based on peer-reviewed research a trans athlete might have a competitive advantage.

It acknowledges “the central role that eligibility criteria play in ensuring fairness, particularly in high-level organized sport” among women.

The framework “recognizes both the need to ensure that everyone, irrespective of their gender identity or sex variations, can practice sport in a safe, harassment-free environment” and “the interest of everyone ... to participate in fair competitions where no participant has an unfair and disproportionate advantage over the rest.”

The new guidelines are not legally binding and the IOC says it remains “within the remit of each sport and its governing body to determine how an athlete may be at a disproportionate advantage compared with their peers.”

"The IOC is therefore not in a position to issue regulations that define eligibility criteria for every sport, discipline or event across the very different national jurisdictions and sport systems.”

The new guidelines have been applauded by prominent trans athlete Quinn, who uses only one name and who won an Olympic gold medal with the Canada women’s soccer team in July, becoming the first openly transgender or non-binary athlete to compete at an Olympic games.

In a statement Quinn said sports policy often “does not reflect the lived experience of marginalized athletes and that’s especially true when it comes to transgender athletes and athletes with sex variations.

“This new IOC framework is groundbreaking in the way that it reflects what we know to be true — that athletes like me and my peers participate in sports without any inherent advantage, and that our humanity deserves to be respected.”

Dr. Jami Taylor, a political science professor at the University of Toledo, Ohio and expert on LGBTQ politics, said barriers to transgender participation likely will remain.

“Many observers thought the IOC would crack down on transgender participation given the uproar over (New Zealand transgender weightlifter) Laurel Hubbard’s participation in the recent summer Olympics,” Taylor said. “At least at first glance the new guidelines for the federations start from a place of transgender inclusion.”

Taylor told The Associated Press she was “shocked a little” at the relaxation evident in the new IOC approach.

“As noted in standard six, there is a pathway to restrict trans women from competition. I fully expect that to be utilized,” Dr. Taylor said.

She said “sport by sport standards really do seem to be the way to go. For instance, boxing and gymnastics are different sports that rely on different attributes and skills. There are also some risk factors.”

Harper, who is a transgender woman and competitive athlete, told The Guardian that while she welcomed the emphasis on inclusion, playing down competitive advantages is concerning.

“Transgender women are on average, taller, bigger and stronger than cis women and these are advantages in many sports," she said. "It is also unreasonable to ask the sports federations to have robust and peer reviewed research before placing restrictions on trans athletes in elite sport. Such research will take years if not decades.”

The IOC has acknowledged the difficulty of balancing inclusiveness with competitive advantage and risk.

Spokesman Christian Klaue said on Tuesday “we have not found the solution to this big question. Clearly this is a topic that will be with us for a long time.”