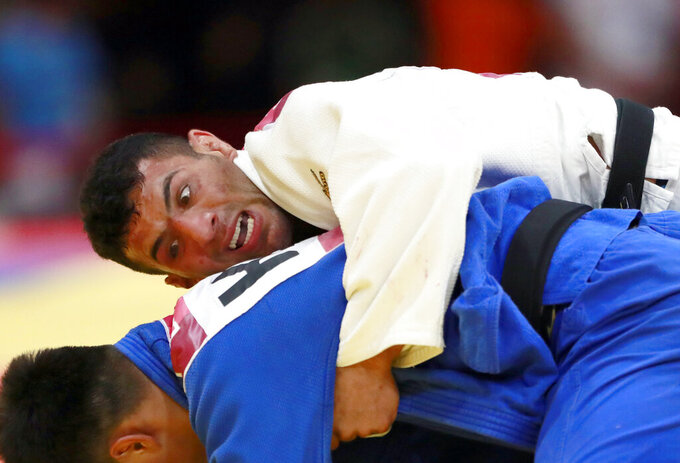 FILE - In this Thursday, Aug. 30, 2018, file photo, Saeid Mollaei of Iran, top, competes against Didar Khamza of Kazakhstan during their men's - 81kg final judo match at the18th Asian Games in Jakarta, Indonesia. A group of athletes and human rights activists is calling on the IOC to sanction Iran's Olympic program for what it says is the country's long-running pattern of ordering athletes to avoid competing against Israelis in international events. Last month, the Court of Arbitration for Sport overturned Iran's suspension from international judo events in a case stemming from former world champion Saeid Mollaei's departure from the Iranian team; Mollaei had claimed he was ordered to lose matches and withdraw from competitions to avoid facing Israelis. (AP Photo/Tatan Syuflana, File)

LAUSANNE, Switzerland (AP) — Iran was suspended by judo’s world governing body on Thursday as punishment for refusing to let its athletes face opponents from Israel.

The International Judo Federation imposed a four-year ban after the Court of Arbitration for Sport ordered a disciplinary review last month which said a previous indefinite ban was not allowed.

The CAS judges had been tough on Iranian officials from the national Olympic and judo bodies and government sports ministry, saying the case “clearly reveals an institutionalized scheme” to prevent athletes facing Israelis.

The ban — backdated to start in 2019 and run into September 2023 — is provisional and can be lifted if the Iranian judo federation respects its rules on discrimination and accepts to compete with Israel.

The IJF said Thursday it “continues to defend the fundamental human values and rights of all its members, with a special emphasis on the rights of athletes and reiterates its commitment to fight against any form of discrimination in the sport of judo."

Until the Iranian policy toward Israel changes, its judokas cannot compete at IJF events, including world championships, and officials cannot take part in the world governing body’s work.

The ban does not affect Iranian judokas going to the Tokyo Olympics because that team is sent by the national Olympic body and not the national judo federation.

Iranian officials can again challenge the IJF verdict at CAS.

Mollaei fled to Germany in 2019 and has since switched national eligibility to compete for Mongolia in a move approved by the International Olympic Committee.