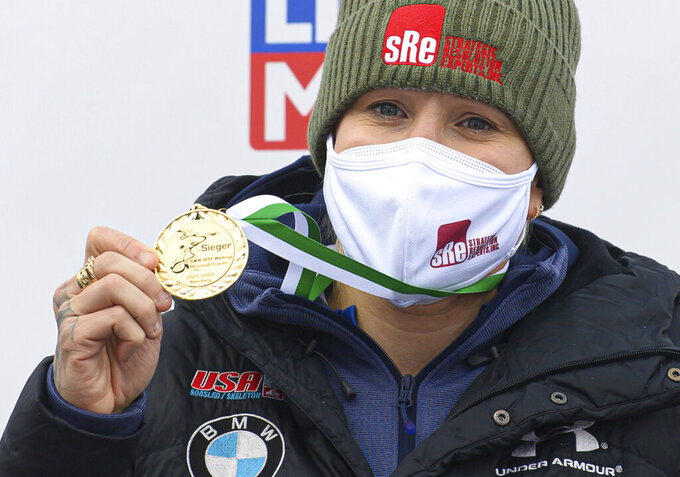 Canada's Kaillie Humphries of the United States holds the gold medal on the podium after her victory in the women's monobob race at the world cup in Altenberg, Germany, Saturday, Dec.4, 2021. (Robert Michael/dpa via AP) 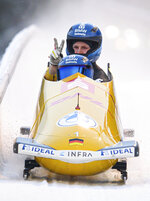 ALTENBERG, Germany (AP) — For Kaillie Humphries, this was a win unlike any other.

Capping an unforgettable week, Humphries won a women’s monobob race on Saturday, doing so less than 48 hours after she completed a 12,000-mile round trip from Germany to the United States and finished the process of gaining citizenship.

It was the 44th international victory of her career on various circuits and at various levels, plus her 12th as a member of the U.S. bobsled team — and her first as an American citizen.

“My first win, officially, as an American,” she said on the medals stand, with her hand over her heart, just a few seconds after realizing she had prevailed.

Humphries had to rally to get the victory. She finished two runs in 2 minutes, 0.57 seconds — just 0.06 seconds faster than Cynthia Appiah of Canada, who held the lead after the first heat. Laura Nolte of Germany was third, 0.53 seconds back of Humphries.

The week wasn’t easy: Humphries was in six different beds in six nights and had the halfway-across-the-world trip squeezed in, with her Olympic hopes hinging on the outcome of the citizenship process. She acknowledged Saturday that not knowing if she would be eligible to compete at the Beijing Games had taken a toll.

Without citizenship, Humphries — a three-time Olympic medalist who came to the U.S. team three years after gaining her release from her native Canada — had no path to the Games this winter. Now, she’s going to be a medal favorite.

“I’d wake up and wonder why I’m doing this, days where I lacked motivation,” Humphries said. “When things get hard you start to doubt, and when you don’t have the Olympics as the end goal that you’re fighting for, those doubts creep in. I love what I do, but being able to wake up today and not have the stress of not knowing whether or not I’d be able to compete in the Olympics was a huge weight lifted off my shoulders.”

Elana Meyers Taylor was sixth for the U.S. in the monobob race.

In the two-man race later Saturday, Francesco Friedrich of Germany rallied to win again and extend his streak to 35 consecutive World Cup two-man races with a medal.

Friedrich and Alexander Schueller were only third after the first heat, then had a blistering second run and prevailed in 1:49.96. Johannes Lochner and Christopher Weber were second for Germany in 1:50.20 and the Russian sled of Rostislav Gaitiukevich and Mikhail Mordasov was third in 1:50.23.

For the U.S. men, Hunter Church and Charlie Volker finished 18th, while Codie Bascue and Hakeem Abdul-Saboor were 23rd.

Competition continues Sunday with the women’s race and the four-man event.