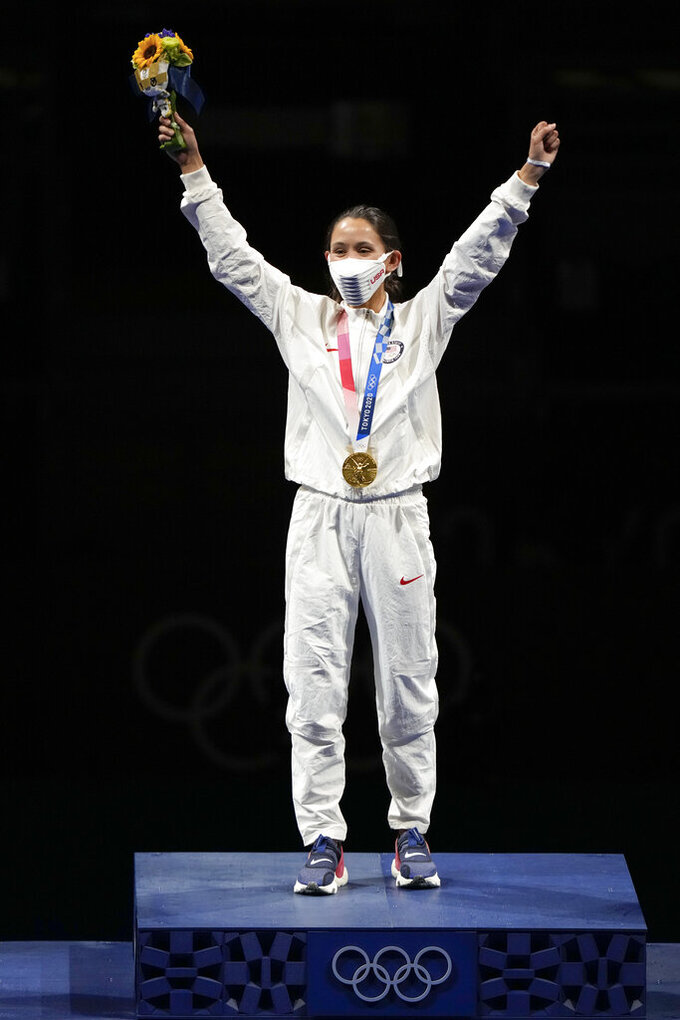 Lee Kiefer of the United States celebrates on the podium after winning the gold medal in the women's individual Foil final competition at the 2020 Summer Olympics, Sunday, July 25, 2021, in Chiba, Japan. (AP Photo/Andrew Medichini)

TOKYO (AP) — Lee Kiefer won the third gold medal for the United States at the Tokyo Olympics and the third fencing gold in the country's history by beating defending champion Inna Deriglazova of Russia 15-13 in the women’s foil final.

Mariel Zagunis is the only other U.S fencer to earn gold, winning the saber events at the 2004 and 2008 Games.

Kiefer ripped off her mask after the final point and shouted “Oh my God!” She placed fifth at the 2012 London Games and was 10th at the 2016 Rio de Janeiro Olympics.

A four-time NCAA champion at Notre Dame, Kiefer is now a medical student at the University of Kentucky. Her husband, Gerek Meinhardt, won bronze with the U.S. team in foil at the 2016 Olympics.

"It’s such an incredible feeling that I share with my coach, I share with my husband, with my family, just everyone that's been a part of this," she said, her gold medal hanging from her neck. “I wish I could chop it up in little pieces and distributed it to everyone I love.”

Larisa Korobeynikova of Russia beat Alice Volpi of Italy 15-14 in the bronze match.

Cannone led 14-9 after two periods in the first-to-15 match and ended it quickly in the third. The 24-year-old Cannone was born in France but grew up in the United States and attended Sacred Heart University. He returned to France in 2016 to boost his chances of qualifying for the 2020 Olympics.

Igor Reizlin of Ukraine won the bronze with a 15-12 victory over Andrea Santarelli of Italy.