The Latest: 70% laid off at Canada’s gymnastics federation 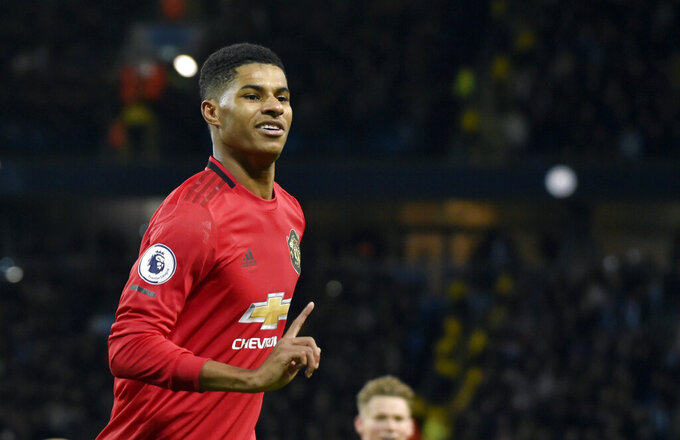 FILE - In this Saturday, Dec. 7, 2019 file photo, Manchester United's Marcus Rashford during their English Premier League soccer match against Manchester City at Etihad stadium in Manchester, England. Paul Pogba and Marcus Rashford are expected to be available for Manchester United whenever the Premier League is allowed to resume after its suspension because of the coronavirus outbreak. Rashford is United’s top scorer and Pogba is the club’s most high-profile player. They were both sidelined with long-term injuries at the time play was halted in England. (AP Photo/Rui Vieira, file)

Canada’s gymnastics federation laid off 70% of its staff this week.

“It’s harsh. This hasn’t been a pleasant week,” Ian Moss told The Canadian Press on Friday. “I would love to be able to phone some of our staff tomorrow and say ‘you’re back.’”

Canada’s amateur sports system will receive nearly $52 million to alleviate the financial pain from the COVID-19 pandemic. Athletes whose monthly Sport Canada checks are affected by the postponement of the Tokyo Olympics and Paralympics to 2021 also receive financial aid.

The Canadian Football League, soccer’s Canadian Premier League and the Canadian Elite Basketball League have asked for millions in relief, but professional leagues were not eligible in the latest funding.

The president of French soccer club Lyon says players in the men’s and women’s teams all tested negative for the coronavirus.

The squads were tested by club doctors at Lyon's training center and “there were no positive cases,” Lyon president Jean-Michel Aulas told regional newspaper Le Progrès.

The men’s French league was canceled with 10 rounds of matches remaining amid coronavirus concerns, with Paris Saint-Germain declared champion and Lyon finishing outside the European places in seventh.

Aulas had argued fervently for it to be completed in late August with a playoff system, but with PSG staying the champion given its large lead before play was stopped.

The president of France Galop says horse racing will resume in France on Monday.

Édouard de Rothschild tweeted that “the resumption of races is accepted” and thanked the French government for allowing it to go ahead.

France is coming out of lockdown on Monday amid the coronavirus epidemic, with the nation confined since March 17.

Races will be held at the famed Longchamp Racecourse in western Paris, which hosts the prestigious Prix de l’Arc de Triomphe in the first weekend of October, and at Compiègne in northern France.

Watford chairman Scott Duxbury says at least six of the 20 English Premier League clubs are concerned about the plan to use neutral stadiums to finish the season.

Duxbury says “there is no altruism in the Premier League” and that “there are 20 different vested interests, which sometimes align but more often than not work purely to protect each individual club.”

Ahead of Monday’s crunch meeting of topflight clubs, the Hornets have joined Brighton and Aston Villa in making clear their opposition to the current “Project Restart” plans.

With nine rounds left, Watford is 17th in the league and looking to fight off relegation amid a challenging backdrop brought on by the coronavirus outbreak.

Duxbury says “some clubs are happy to sign up to ‘Project Restart’ because arguably there is only an upside in participating in this compromised format. It means Liverpool can win the title, other clubs can book their place in Europe next season or potentially fight their way up the table from a position of safety.”

But he adds "when at least six clubs - and I suspect more - are concerned about the clear downside and the devastating effects of playing in this kind of distorted nine-game mini-league, then I believe the Premier League has a duty of care to address those concerns."