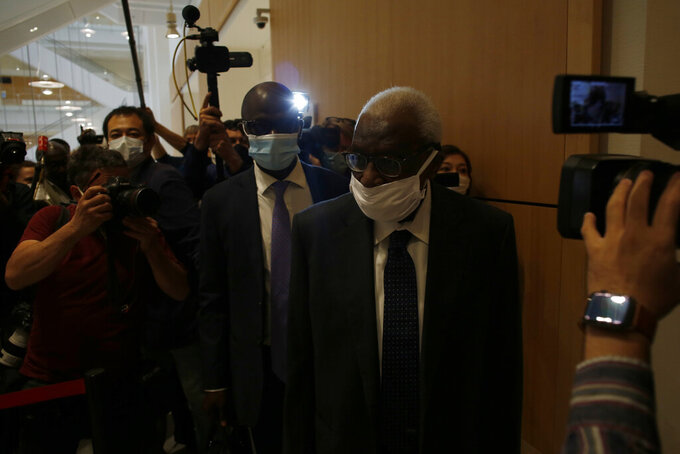 Former president of the IAAF (International Association of Athletics Federations) Lamine Diack, center, arrives at the Paris courthouse, Monday, June 8, 2020. A sweeping sports corruption trial opened Monday in Paris involving allegations of a massive doping cover-up that reached to the top of world track and field's governing body. Lamine Diack, 87, who served as president of the body for nearly 16 years, is among those accused of receiving money from Russian athletes to hide their suspected doping so they could compete at the Olympics in 2012 and other competitions. His son Papa Massata Diack is also charged in the case. (AP Photo/Thibault Camus)

PARIS (AP) — A Paris court heard allegations Monday that top athletes hushed-up suspected doping by giving millions of dollars in illicit payoffs to corrupt administrators, as the trial got underway for the disgraced former head of track and field who was once among the most influential leaders in Olympic sports.

Wearing a face mask, Lamine Diack was present in court for the first of six days of hearings that will weigh evidence that his presidency of track and field’s governing body was riddled with corruption and other malfeasance, hurting athletes who raced against competitors who were suspected of doping but have since testified that they paid to keep competing.

Documents seized during the years-long investigation suggested that athletes paid to have doping charges buried or delayed, an illicit mechanism dubbed “full protection,” the court president said, outlining the case with tentacles stretching from Europe to Asia and Africa.

In the audience was a French marathon runner, Christelle Daunay, who competed against one of the athletes, Russian runner Liliya Shobukhova, who later testified to investigators about illicit payments to hush-up doping. Beaten by Shobukhova at the 2011 Chicago Marathon, Daunay is a civil party to the case and is seeking 110,000 euros in damages and compensation for earnings she believes she lost because of the alleged cover-ups by administrators at the IAAF, including Diack.

“It was a whole system and when you see all the money involved, it's shocking,” Daunay said.

Diack, 87, the IAAF president for nearly 16 years, is being tried for corruption, money laundering and breach of trust. Prosecutors say he directly or indirectly solicited 3.45 million euros ($3.9 million) from athletes suspected by the IAAF of doping who paid to have their names cleared so they could continue competing. About two dozen Russian athletes were reportedly involved. Shobukhova testified that she alone paid the equivalent of 450,000 euros, a large chunk of which was subsequently refunded to her when she was later suspended for doping despite the alleged payoff, the court president detailed.

As IAAF president, Diack oversaw an era when Usain Bolt made track and field wildly popular. But Diack’s legacy, and the IAAF’s credibility, took a beating after he stepped down in 2015. He was arrested in France and investigators revealed accusations of athletes being squeezed for payments.

Gabriel Dolle, who oversaw drug-testing at the IAAF and is accused of taking 190,000 euros in payments, told the court that Diack asked him that suspected doping cases involving Russian athletes be handled “reasonably” to avoid a scandal that could set back IAAF negotiations with sponsors.

Dolle said he agreed to a “special, discreet” treatment for some athletes suspected of doping, which would have involved them being quietly prevented from competing. He said he was "furious" when some of them were then allowed to compete at the London Olympics.

“It was counter to what had been agreed. It was a betrayal,” he said.

Dolle is being tried on a corruption charge. He acknowledged having taken an envelope of money in 2013 from Papa Massata Diack, one of Diack's sons. Dolle said Papa Massata Diack told him the money is “for what you're doing for the Russian cases.”

Papa Massata Diack also faces corruption, money laundering and breach of trust charges. He lives in Senegal, which has refused France’s extradition requests for the former IAAF marketing consultant. He did not attend Monday’s hearing.

The court briefly considered but then rejected a request from a lawyer for Papa Massata Diack that the trial be delayed because two of his lawyers couldn't attend because of coronavirus travel restrictions.

The trial had already been delayed from January to allow the inclusion of new evidence.

Lamine Diack is expected to testify on Wednesday. He was detained on a trip to France in 2015 and has been forbidden from leaving the country since.

Also on trial on corruption charges is a lawyer who advised Diack, Habib Cisse. Two Russians are being tried in their absence: Valentin Balakhnichev, a former IAAF treasurer, and Alexei Melnikov, a coach who led Russia’s long-distance running program.