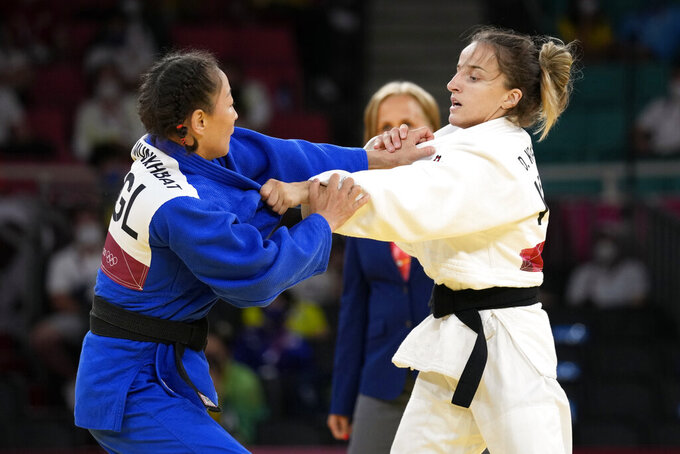 TOKYO (AP) — Naohisa Takato spent the past five years fixated on a vision.

He saw himself standing on the podium at the Nippon Budokan alongside Funa Tonaki with judo gold medals around their necks, basking in the cheers of their adoring home crowd on the opening night of the Tokyo Olympics.

When the moment finally arrived, Takato had the gold, but he wasn't joined by Tonaki or the fans.

The feisty judoka still felt the virtual love from a nation that just might warm up to these trouble-plagued Tokyo Games after watching his brilliance in Japan's beloved, homegrown martial art.

Takato won Japan’s first gold medal at its home Olympics, beating Taiwan's Yang Yung-wei in the men’s 60-kilogram judo final to cap a series of dramatic victories that could erase some of his nation's profound ambivalence about these trouble-plagued games.

Hopefully Takato can inspire a nation as well after dramatically winning his final three bouts in sudden-death golden score. The charismatic Takato’s success — and Tonaki’s heartbreaking defeat — could provide a much-needed jolt of excitement for a nation discouraged by the scandals and coronavirus setbacks surrounding the Olympics.

Takato won the final a bit anticlimactically after Yang committed too many fouls, but his celebrations at the venerable Budokan were heartfelt and true.

“I have been longing for winning in this historic building since my childhood,” he said. “The fact that I was able to be a judoka in this building is something I can be proud of, and I made my dream come true because I got a gold medal in this building.”

His smiles were easily relatable to Japanese fans who understand the gravity of his achievement, along with what his Japanese teammates hope to accomplish in the following seven days. Japan won 39 gold medals and 84 total medals in judo before these games, both tops in Olympic judo history and Japan’s Olympic history in any sport.

The 28-year-old Takato atoned for his disappointing bronze-medal performance in Rio de Janeiro five years ago with a hair-raising run to the Tokyo final at the Budokan, the site of judo’s introduction to the Olympics in 1964.

Takato attributed his struggles in Rio to his inability to handle the enormous pressure as his team’s leadoff Olympic fighter, due to competing in the sport’s lightest weight class. Takato said he couldn’t even remember the details of his trip to Brazil, so fried were his nerves — but he spent the past five years mentally preparing for the expectations that he met so superbly.

“For the past five years since Rio, I have been concentrating on my training so I could make amends,” Takato said. “Sometimes the effort would not bring the results, but if I make a right and correct effort, I can come up with results.”

Takato won two of his final three bouts in Tokyo on extra-time fouls against his opponent, and he went seven minutes into golden score in a superb semifinal before finishing Kazakhstan’s Yeldos Smetov. Takato carried that momentum into the final against Yang and claimed his second Olympic medal.

Takato and Tonaki were under extraordinary scrutiny in Tokyo, where some Japanese media suggested the entire Olympic team’s performance could rise or fall depending on the first day’s judo results.

After the 4-foot-10 Tonaki earned a series of stirring wins against larger opponents, she fell agonizingly short of gold. Krasniqi won on a throw with 20 seconds left, scoring a waza-ari and claiming Kosovo’s second-ever Olympic medal.

Despite its continuous judo excellence, Japan hadn’t won gold in either of the Olympics’ two lightest weight classes since Athens in 2004, when Tadahiro Nomura wrapped up his unmatched record run to three consecutive gold medals at 60 kilograms.

Takato and Tonaki got their Olympic places early last year, shortly before the pandemic forced the Olympic postponement. Both judokas have spoken publicly about their battles with nerves on their sport’s biggest stages.

Yet even with an extra year to stew on the gravity of their roles for their nation on opening day, Tonaki and Takato both came through with inspiring efforts in a series of draining, high-level bouts.

Takato said his toughest bout was his grinding quarterfinal against Georgia’s Lukhum Chkhvimiani, who won a world championship at the Budokan two years ago. The players went scoreless in regulation after Chkhvimiani nearly ended it with a mid-bout throw, and Takato barely avoided two major trouble spots in golden score.

Over 3 1/2 minutes in, Takato was nearly thrown again — and then the bout abruptly ended when a frustrated Ckhkvimiani was called for a foul, sending Takato into the semifinals.