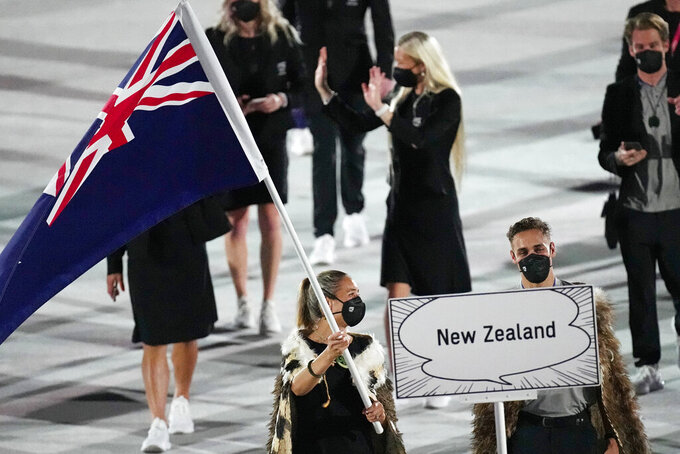 Sarah Hirini and David Nyika, of New Zealand, carry their country's flag during the opening ceremony in the Olympic Stadium at the 2020 Summer Olympics, Friday, July 23, 2021, in Tokyo, Japan. (AP Photo/David J. Phillip)

TOKYO (AP) — Other teams worried about a lack of competition to prepare for the Olympics. That’s not how rugby works in New Zealand.

Alan Bunting, co-coach of the New Zealand’s women’s sevens team, was more concerned about his Black Ferns getting too much.

“I wouldn’t say lack of competition,” Bunting said in response to questions about what impact the COVID-19 disruption of the world sevens series would have on his team. “There’s some pretty intense internal competition, we’ve had plenty of that. It’s pretty ferocious.”

In New Zealand, where rugby is the national game and it seems everyone has a stake in it, they don't call them game simulations for no reason.

The coaching staff “have to referee it,” Bunting said. “If we don’t get something quite right, we really hear about it.”

The New Zealanders are the world sevens series champions, the sevens World Cup champions and ranked No. 1 ahead of the Olympics. But they know from bitter experience that form before the Games doesn’t guarantee an Olympic gold.

Australia won the first-ever women’s Olympic gold medal in the sport of rugby, beating the New Zealanders in the final at Rio de Janeiro in 2016.

For the likes of captain and New Zealand Olympic flag bearer Sarah Hirini and leading scorer Portia Woodman, the preparation for the Tokyo Games began the minute they stepped off the podium in Rio with silver medals around their necks.

“I don’t feel like we’ve missed anything that we should have done,” Bunting said of the buildup. “Over the last four of five years the youth and the depth has come through — (established players) can’t really take a break for a second because somebody is chasing you. It’s exciting for now and it’s exciting for the future.”

While Australia and New Zealand dominated the Rio Olympic tournament, the gap between those teams and the chasing pack has been eroded. The U.S., Canada and Britain are genuine contenders for medals.

The tournament kicks off with France vs. Fiji and Canada vs. Brazil in Pool B. In Pool C, the Australians open against Japan and the U.S. takes on China. The Pool A openers have New Zealand against Kenya and Britain taking on the Russian team.

The U.S. and Australia have been grouped together again. Alev Kelter was part of the U.S. squad that held the Australians to a 12-12 draw in the group stage in Rio but, after a narrow quarterfinal loss to New Zealand, had to settle for fifth place.

Kelter grew up playing hockey and soccer in Alaska and was part of U.S. junior national squads. She made the move to rugby after missing out on the 2014 Winter Olympics.

She's been part of the emergence of the U.S. rugby sevens women's team, which finished the 2019 world sevens series ranked No. 2 and won the Glendale title in the shortened, five-stop 2020 season — it was the only tournament New Zealand didn't win.

The COVID-19 pandemic has restricted international competition, which has only increased the tension ahead of the Olympic tournament.

“In the midst of all this chaos, rugby is the peace and serenity,” Kelter said. “Once we get onto the pitch, it’s going to be awesome.”

The Australian squad contains a core of Olympic champions from Rio, including Charlotte Caslick, Sharni Williams and Shannon Parry. The two rookies selected include 19-year-old Maddison Levi, a former dancer and a multisport athlete who has a contract with an Australian rules football club.

The chance of an Olympic medal was all the encouragement she needed to try rugby sevens.

“I was a bit hesitant, being a shy little dancer, but the mongrel in me definitely took over when I got on the field,” Levi said. “I found my sport. I’ve loved every minute.”

The Australians are ranked second for the Olympic competition behind world sevens series champion New Zealand, but being the defending champions means they’re the biggest target in the competition.

It's not daunting for Levi: “Being a hunted team works to our advantage."