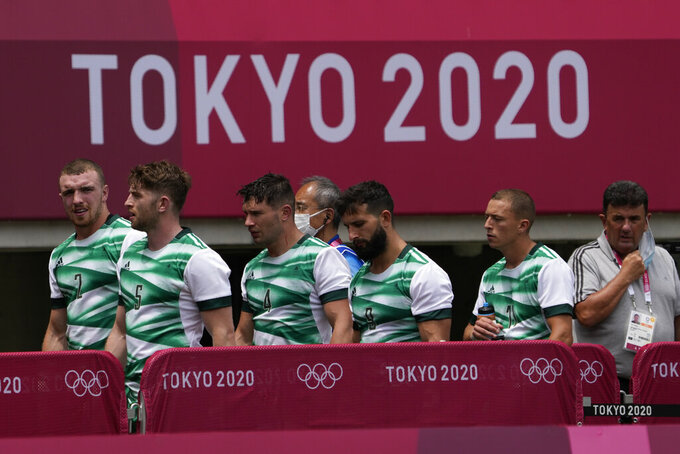 The Irish team walks off the pitch after being defeated by South Africa in their men's rugby sevens match at the 2020 Summer Olympics, Monday, July 26, 2021 in Tokyo, Japan. (AP Photo/Shuji Kajiyama) 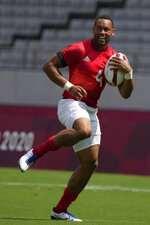 TOKYO (AP) — Joe Webber is a good illustration of the difference between New Zealand's opening days in the Olympic rugby sevens tournaments in Rio de Janeiro and Tokyo. And it's not just the hair.

By his own calculations, Webber lasted one tackle before he was sidelined in 2016, when rugby sevens made its Olympic debut and highly-ranked New Zealand was upset by Japan in its opening game, eventually missing out on a medal.

On Monday, with the score locked 14-14 in the second half against Argentina, he took an inside pass and sprinted away to score a momentum-changing try that propelled New Zealand to a 35-14 win. It gave the All Blacks Sevens team back-to-back wins in Pool A following an opening 50-5 win over South Korea. Argentina and Australia each have a win and a loss in the group.

“We mentioned that after the first game — it was good to win our first game of the tournament at the Olympics,” Webber said. “So yeah, I hope we just improve as we go."

Defending champion Fiji and 2016 silver medalist Britain were both 2-0 in Pool B. South Africa, the bronze medalist in Rio, and the United States were 2-0 in Pool C. All five unbeaten teams are assured of a spot in the quarterfinals.

Japan made a surprise run to the semifinals in 2016 and there were local expectations of a medal in Tokyo. Deprived of a home crowd because fans are banned amid COVID-19 restrictions, Japan had a narrow 19-14 loss to Fiji before a 34-0 loss to Britain. The hosts now need to beat Canada to have any chance of advancing as one of the two best third-place teams.

“It definitely had an impact," Japanese player Kameli Soejima said, looking around a cavernous Tokyo Stadium that was lacking the buzz of a crowd. “We're not blaming that for how we've played, though. We've just got to be better.”

After five months in a traveling bio-secure bubble that has taken them from Fiji to Australia and into Japan, the Fijians showed flashes of brilliance and a little bit of rust on Day 1 and are sitting behind Britain, which has scored 58 points and conceded none.

The teams will meet in a 2016 final rematch in Tokyo on Tuesday but it’s in the group stage this time.

Fiji captain Jerry Tuwai said his team always treats its next match the same way: like a final.

The Fijians kicked off the tournament and scored the first points within 30 seconds, but trailed by seven points in the second half against Japan before scoring two late tries to win. The Fijians were level with Canada in the second half of their night match before finishing off a 28-14 win.

“Right now, we are the defending champions of the Olympics, so all the pressure is on us,” Tuwai said. “We’re not that satisfied about the performance today, but we have another day tomorrow.”

The U.S. and South Africa will meet Tuesday to determine first place in their group ahead of the night-time quarterfinals. The semifinals and final are scheduled for Wednesday.

The Americans had two tight wins, with captain Madison Hughes finishing off a length-of-the-field winning try as the Eagles edged Kenya 19-14 at the end of the morning session. They later held off Ireland 19-17.

“You know, it’s all about going into Day 2," U.S. winger Perry Baker said. “We took care of the first games, which was very important for us. So I feel good, no matter how we got the win."

The South Africans, with their coach in quarantine outside of Tokyo after a positive test for COVID-19, cast aside their disrupted preparations with wins over Ireland and Kenya.

The most contented team after the opening day would have to be New Zealand, which entered the tournament as world sevens series champions following last year's pandemic-shortened season.

Webber was one of four New Zealanders hurt early in the tournament in Rio five years ago. He also had to take time out from rugby to recover from a kind of arthritic infection that forced him out of the squad that won the 2018 Commonwealth Games. And he spent time in lockdown in New Zealand last year during the pandemic, coming out of it with a distinctive new look — a fully shaved head except for some some dreadlocks at the back.

He said he's cherishing every moment in Tokyo.

“Definitely, especially from the last Olympics, where I lasted just one tackle and I was out,” he said. “So, to make it through two games is pretty special. I’m just loving every minute.”