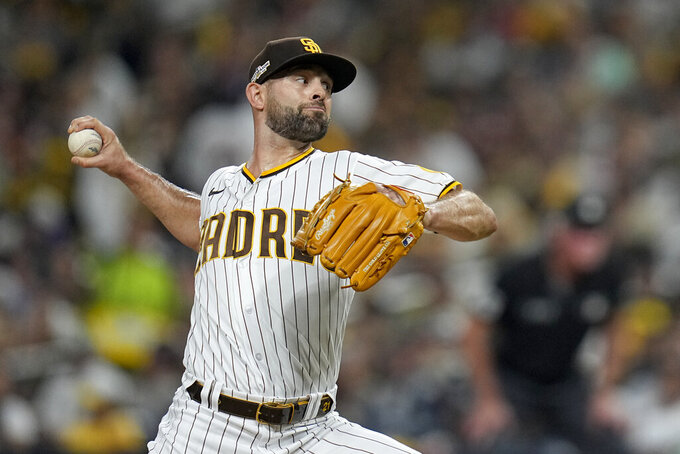 FILE- San Diego Padres relief pitcher Nick Martinez throws during the eighth inning in Game 1 of the baseball NL Championship Series against the Philadelphia Phillies on Oct. 18, 2022, in San Diego. Martinez and the Padres finalized a $26 million, three-year contract for the pitcher to remain with San Diego. (AP Photo/Gregory Bull, File)

SAN DIEGO (AP) — Nick Martinez and the Padres finalized a $26 million, three-year contract for the pitcher to remain with San Diego.

Martinez gets a $10 million salary next year, and the Padres have options at $16 million for 2024 and 2025 under the agreement announced Tuesday. Both options must be decided after the 2023 season.

If San Diego declines the options, Martinez would have $8 million player options for 2024 and 2025.

Martinez gets a hotel suite on road trips and will become a free agent again when the contact ends.

Martinez went 4-4 with a 3.47 ERA with eight saves in 10 starts and 37 relief appearances for the Padres this year. The 32-year-old right-hander spent the previous four seasons in Japan with the Hokkaido Nippon Ham Fighters and then the Fukuoka SoftBank Hawks.

He had turned down a $6.5 million player option with the Padres, triggering a $1.5 million buyout that ended his contract after one year and $7.5 million. If he had kept his contract, he would have been guaranteed $25.5 million from 2021-23.