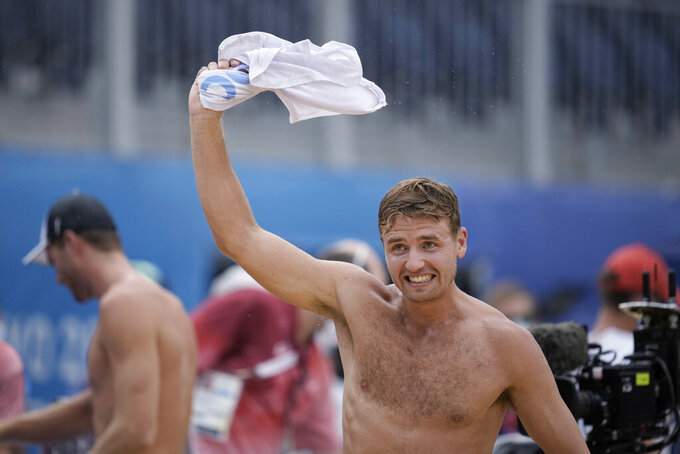 TOKYO (AP) — Anders Mol’s first goal for the Olympic beach volleyball tournament was a top-eight finish. That would be the best ever for Norway, and one step farther than a certain Merita Berntsen made it in Atlanta.

“I always dreamed of beating my mom in the Olympics,” the son of the 1996 Olympian said after a victory over Russia to win the gold medal with Christian Sorum on Saturday.

“She had a ninth and I was actually really happy when we made the quarterfinal because we became historic,” he said. “It’s been a journey for a long time. And now I think our parents and our families are really proud of us right now.”

The top-seeded team in the Olympics and the youngest ever to win a beach volleyball gold, the Norwegians beat reigning world champions Viacheslav Krasilnikov and Oleg Stoyanovskiy 21-17, 21-18 in an intermittent rain.

With Qatar’s victory over Latvia for the bronze earlier Saturday, all three countries on the podium — and all six players — are first-time medalists. In fact, the only repeat medalist at the Shiokaze Park venue was American April Ross, who won silver in London, bronze in Rio de Janeiro and gold with Alix Klineman on Friday.

Mol, 24, and Sorum, 25, figure to be a threat again at the Paris Games, which because of the pandemic delay in 2020 are just three years away. And if not them, there are four other Mol siblings in the sport who will be trying to match — but never beat — the family's top finish.

“Anders has as saying, ‘This is only the beginning,’” said his father, Kaare Mol, who coached the Norwegian team this year just as he did for his wife's team in Atlanta. “And maybe it's only the beginning of the family history of beach volleyball.”

In the first-ever Olympic men's beach volleyball final to match the top two seeds, the Russians led 8-4 before giving up six straight points, including one when Mol went up for a block and landed on Krasilnikov’s foot.

Russia called timeout and limped to the bench for treatment, but the match resumed and Norway extended the lead to 15-11.

“It was just a sports accident. It could happen in any game,” Stoyanovskiy said, answering in English for his partner. “It hurt a little bit, but it didn’t change our game plan. They were the best team today."

The second set was tied 12-12 before Norway scored four points in a row and never trailed again. After Krasilnikov served into the net on match point, Sorum dropped to his knees and Mol jumped onto his back.

They exchanged jerseys with the Russians, and then Mol swung Krasilnikov's white tank top in the air like a captured flag of surrender.

“It’s been our dream for so long,” Sorum said. “Three years ago, I took a screenshot of the Olympic gold medal from Rio ... on my phone and I watched that every day since. And to stand here with a gold medal with Anders and together with the team, it’s just amazing.”

Cherif Younousse Samba and Ahmed Tijan of Qatar beat Latvia 21-12, 21-18 in the third-place match for the first Olympic medal in the sport for any country in the Middle East.

Martins Plavins was trying to earn his second bronze medal, to go with the one he won in London. Instead, he and Edgar Tocs finish fourth — just as the Latvian women did a day earlier.