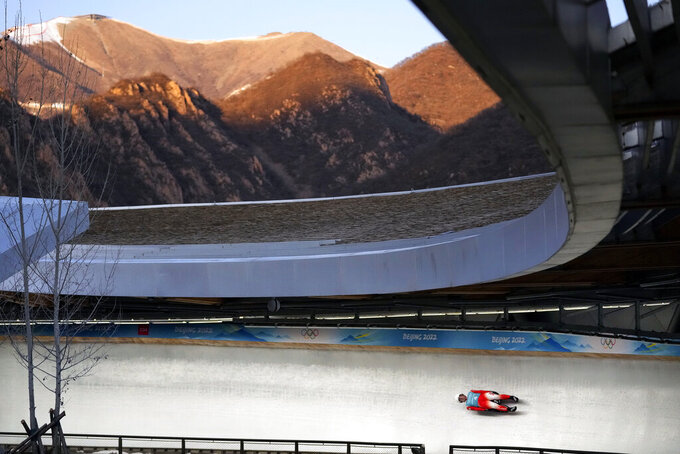 Mateusz Sochowicz of Poland speeds down the track during a men's luge training run at the 2022 Winter Olympics, Thursday, Feb. 3, 2022, in the Yanqing district of Beijing. (AP Photo/Mark Schiefelbein)

BEIJING (AP) — Polish luge athlete Mateusz Sochowicz went back to the Peking University hospital this week, entering the facility for the second time this season.

The first trip was so doctors could tend to his badly injured legs.

The second trip was to thank them for saving his Olympic hopes.

“I have proved to myself that nothing is impossible,” Sochowicz said.

Sochowicz escaped what could have been a catastrophic injury at the Yanqing National Sliding Center back in November, when he crashed into a metal gate that was inexplicably blocking the track during a training run. His left kneecap was fractured, his right leg was cut to the bone, and he was probably fortunate that his injuries were not significantly worse.

Not even three months later, he’s back at the same track — set to compete in the men’s luge event that starts Saturday, the first official sliding competition of the Beijing Games. He’s not one of the medal favorites, a role that instead will be filled by the likes of Germany’s Felix Loch and Johannes Ludwig, Austria’s Wolfgang Kindl, Italy’s Dominik Fischnaller and Latvia’s Kristers Aparjods.

He is, however, one of the favorites among his peers, simply because of what he’s gone through.

Nobody knows quite how fast Sochowicz was going when the November crash happened; a reasonable guess would have him somewhere in the vicinity of 60 mph (96 kph). Sochowicz had time to see that the gate was closed and he tried — somewhat successfully — to stand up, bail from the sled and leap over the barrier.

That move, the likes of which even veteran luge athletes are still marveling over, definitely lessened the impact of his injuries and quite possibly saved his life. The International Luge Federation said the crash was caused by “human error,” quite simply meaning someone should have ensured that the gate was open with a sled in the track.

“At the very beginning, I had a big grudge against the people who hurt me, but I decided that nobody did it on purpose,” Sochowicz said. “Mistakes happen. I’m tough. I dealt with it.”

The rehab process was brutal. For a few days after the surgery, he couldn’t walk. Bending his left knee was impossible. The cuts on his right leg needed time to heal. And with an Olympics looming, Sochowicz found that his patience was in short supply.

“My story may have ended at the scene of the accident or it may end happily, and I would not forgive myself if I had not tried,” Sochowicz said.

Poland qualified one sled for the men's luge event and Sochowicz, even with only one race completed this season (he made it to the season finale in St. Moritz, Switzerland), got the spot.

So, he’s back in Beijing. He was warmly received at the hospital a few days ago, meeting with his surgeon again and posing for a few celebratory pictures. And at the track, Sochowicz is putting the memories of his first visit there in the rear-view mirror.

He slides through the turn where the crash happened without fear. His comeback is complete.

“It’s incredible,” Mazdzer said. “After going through that, I could imagine coming back next year. But this is his first real track back and it’s the one that could have ended his life. Hats off to him.”