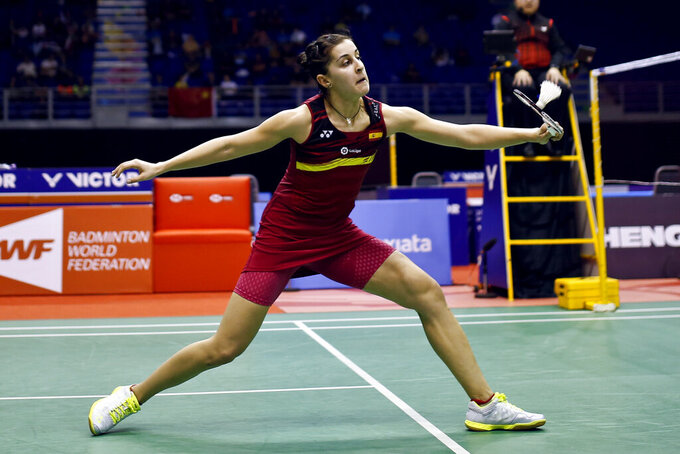 FILE - In this Saturday, Jan. 20, 2018 file photo, Carolina Marin of Spain returns a shot to Tai Tzu-ying of Taiwan during the semifinal round of the women's singles match in the 2018 Malaysia Masters badminton tournament in Kuala Lumpur, Malaysia. Spanish Olympic badminton champion Marin said Tuesday, June 1, 2021 she will not defend her title at the Tokyo Games because of a knee injury. (AP Photo/Sadiq Asyraf, file)

MADRID (AP) — Olympic badminton champion Carolina Marín will not defend her title at the Tokyo Games because of a knee injury.

Marín said Tuesday that medical tests confirmed she has damage to her meniscus and a torn anterior cruciate ligament in her left knee. The Spanish star is expected to undergo surgery this week.

“It's another tough blow that I will have to overcome,” Marín said on her Instagram account. “But make no mistake about it, I'll be back.”

Marín, a three-time world champion and a five-time European champion, was injured during training last week. She had a similar injury in her right knee in 2019.

Marín was one of Spain's best hopes for a gold medal in Tokyo, having reached the final in all five tournaments she played this year, winning four of them.