Olympics on NHL ice should make for faster, better hockey 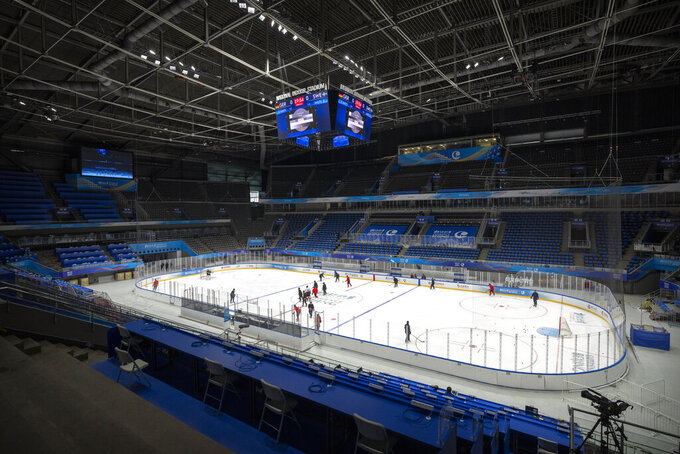 BEIJING (AP) — NHL players are not at the Olympics. NHL ice is, and that should make for better hockey.

The Olympic tournament is taking place on 200-by-85-foot surfaces for the first time since the 2010 Vancouver Games, when Canada beat the United States for gold. It's an advantage for the North American teams that want to play a more direct style and a boost for the chance of seeing fast-paced, quality action that's often lacking on wider, international-sized rinks.

“I do think the games do get a little bit more entertaining just because there’s so much more happening than obviously on the bigger ice, where there’s a little bit more room for everyone,” said Sweden center Joakim Nordstrom, a veteran of almost 500 NHL games. “On the smaller ice, you can really see the best players separate themselves from the others. They still are able to do the skilled stuff. I think it’s pretty exciting to see NHL-level skill guys, what they can do in the tighter areas.”

In the absence of NHL talent at the Pyeongchang Olympics four years ago, the Russians used their talent surplus to win gold in a tournament that was lacking end-to-end excitement. Canada used the surface to its benefit at the 2014 Sochi Games by holding on to the puck for the majority of every game on a dominant run to gold.

Don't expect any team to be able to do that this time, but the Americans and Canadians are plenty comfortable with a north-south game that the NHL surface allows for.

“This is where guys have grown up playing,” Canada coach Jeremy Colliton said. “We’re a big team, comfortable in the battle areas, and that’s what we’re going to try and make it that way when we play.”

Canada held pre-Olympic camp in Switzerland practicing on the bigger international ice, and captain Eric Staal could feel the difference on the more familiar NHL rink when the team skated the first time in Beijing. It was evident in the U.S.-Canada scrimmage Monday that included a big hit on the opening shift and a handful of turnovers leading to breakaways when the play went to 3 on 3.

U.S. defenseman Brock Faber, who was knocked to the ice by Mason McTavish in the opening seconds of that scrimmage, called it “a grown man's game.” The tighter ice is also good for the Americans because 15 players come from college hockey and can quickly turn any game into a track meet.

“We want to play fast, and on smaller ice it’s an advantage to play fast and play hard,” U.S. center Andy Miele said. “Got to be good on the forecheck and great on the backcheck. I think that’ll play into our favor.”

The Russians are favored to win the tournament, and the other European teams expect to adjust quickly to the pace of international hockey on NHL ice.

“We have enough skates and practices to get used to it and work it, but obviously it makes the game a little faster, so we got to make faster and smarter decisions with the puck,” said Germany forward Tom Kuhnhackl, who was in the NHL as recently as 2020 with the New York Islanders. “Not a whole lot changes. For us as a team, we want to play as a group, as a five-man unit out there. We want to attack with five guys, play neutral zone as a group but also in the D zone.”

Slovakia coach Craig Ramsay, a longtime NHL assistant, expects his team — which features the two youngest players in the tournament — to play an aggressive style that's tailored to this surface. That's not usually Finland's game, which is predicated on solid structure and teamwork, but some guiding principles stay the same and could make the Finns a serious medal contender.

“Of course we understand there’s a little bit more 1-on-1 battles and how we play in front of both nets is very important — even more important than on the bigger rink,” Finland coach Jukka Jalonen said. “We want to play hard in front of the net. We have to be ready to defend because if you want to win something, you have to defend well. I think that’s the main thing.”

And score in bunches if the situation allows.

U.S. coach David Quinn wants his young team to force the issue as much as possible and not sit back and wait for opponents to dictate. Having college stars like Matty Beniers and Brendan Brisson is a good fit for this ice, where offense can come from anywhere.

“You can shoot from everywhere in the O-zone,” said Czech Republic center David Krejci, who played 15 NHL seasons with the Boston Bruins. “Same thing in the D-zone: You’ve got to be aware that people are just crashing the net.”

It will take some serious getting used to for China, which faces off with the United States on Thursday in each team's first game. Even with a majority of the players having North American roots, the small ice at this caliber of hockey is a major problem for the hosts.

“It’s a different game on the short ice,” Canada-born China forward Brandon Yip said. “Everything’s going to happen a lot faster, and we’re really trying to pound that into our guys’ minds. We’ve got to really start playing ahead of the game, which means you’ve got to know what you’ve got to do before you get the puck.”