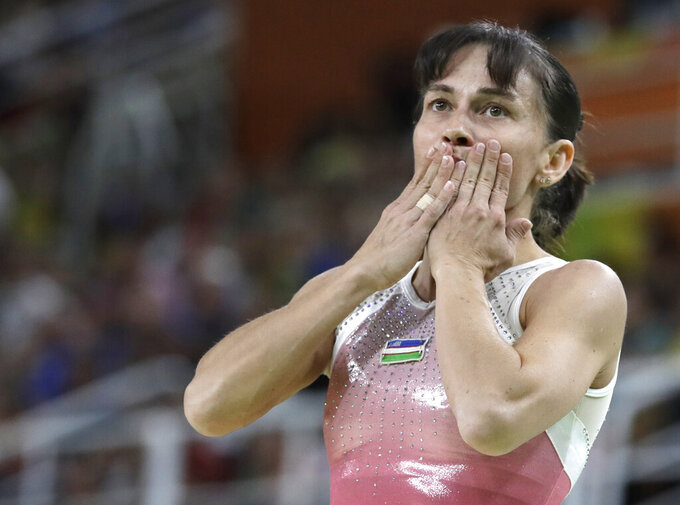 FILE - In this Sunday, Aug. 7, 2016 file photo, Uzbekistan's Oksana Chusovitina acknowledges the audience after her routine on the balance beam during the artistic gymnastics women's qualification at the 2016 Summer Olympics in Rio de Janeiro, Brazil. Chusovitina had considered retirement before but chose to carry on before qualifying for her eighth Olympics — breaking her own record in the sport. This time around, the 1992 gold medalist said Tokyo will be her last Olympics. “It's already good that they have postponed. Everything will calm down and everything will be fine, and I think then the Olympics will go ahead as normal,” said the 44-year-old Chusovitina, who is training in restricted. (AP Photo/Rebecca Blackwell, file)

DÜSSELDORF, Germany (AP) — Even if it takes an extra year, Nino Salukvadze will still be aiming for an Olympic record.

The Georgian shooter has competed at every Olympics since 1988, where she won a gold medal for the Soviet Union. At the Tokyo Olympics — now postponed until 2021 because of the coronavirus pandemic — she will set a women's record of nine appearances.

She's happy to wait for it.

“We're restructuring my training and there's nothing terrible about that. The main thing is health,” Salukvadze told The Associated Press in a telephone interview from her home in the South Caucasus nation.

Salukvadze is one of a host of Olympic veterans taking the extra year in stride. There's also 37-year-old American hurdler Lolo Jones, who is hoping to return to the track in Tokyo, and Uzbek gymnast Oksana Chusovitina, who has qualified for her eighth Olympics — breaking her own record in the sport.

Chusovitina has considered retirement before but chose to carry on. This time around, the 1992 gold medalist said Tokyo will be her last Olympics.

“It's already good that they have postponed. Everything will calm down and everything will be fine, and I think then the Olympics will go ahead as normal,” said the 44-year-old Chusovitina, who is training in restricted conditions because of the virus outbreak. “I want to compete in Tokyo and retire."

Chusovitina said Uzbek officials sent her home from a training center after the Olympics were postponed, leaving her to spend unexpected downtime with her husband and dogs.

It's a rare quiet point in her uniquely long-running gymnastics career. Chusovitina has been competing at elite level since the 1980s, long before most other current gymnasts were born.

Salukvadze hasn't set a date for retirement, but said each Olympic cycle is tougher than the last. Experience is a strength, though.

“The physical burden is one thing, but the psychological side plays a big role,” she said.

The delay caused by the outbreak may even be a boost to the 51-year-old Salukvadze's hopes of adding to her career tally of one gold, one silver and one bronze in shooting. She had eye surgery in December and needs time to adapt to the change.

For now, she is in limited fitness and air pistol training at home with her son Tsotne Machavariani, a shooter who competed at his first Olympics in 2016. They're in isolation for 14 days after returning home from neighboring Azerbaijan and are passing the time with table tennis.

Salukvadze secured a qualifying spot in 2019 and the International Shooting Sport Federation told the AP on Wednesday it will confirm already-qualified athletes despite the postponement. When the Tokyo Olympics happen — no new date has been selected — Salukvadze will pull ahead of the two other eight-time female Olympians with whom she shares the record.

German-Italian canoeist Josefa Idem retired after the 2012 Olympics and Canadian rowing cox Lesley Thompson-Willie moved into coaching since her last Olympic appearance in 2016.

The all-time record holder, male or female, is 73-year-old Canadian show jumper Ian Millar, who competed at 10 Olympics between 1972 and 2012. He retired last year.

Salukvadze's long Olympic career has come despite many hardships.

In 1992, she competed shortly after the Soviet Union had fractured and her home state of Georgia was sliding into conflict. She reached the 1996 Atlanta Games despite economic turmoil. During the 2008 Olympics, Georgia was at war with neighboring Russia, and Salukvadze embraced a Russian competitor on the podium in a call for peace.

“There was war. There was hunger. We lived without light or gas. In the 1990s, we lived through worse than this with the coronavirus,” Salukvadze said. “There was a lot of friendship and everyone united.”