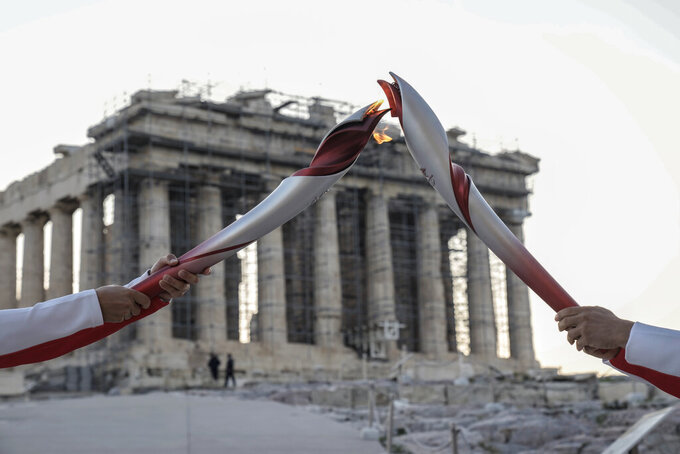 Greek torch bearer Ioannis Melissanidis, left, Olympic gold medalist in Gymnastics , passes the flame to Christos Volikakis, world Champion in Cycling, in front of ancient Parthenon temple atop of the Acropolis Hill in Athens, Tuesday, Oct. 19, 2021. The flame will be transported by torch relay to Beijing, China, which will host the Feb. 4-20, 2022 Winter Olympics.(AP Photo/Petros Giannakouris)

Activist groups, which also disrupted the flame lighting ceremony in southern Greece on Monday, accused the International Olympic Committee of granting legitimacy to rights abuses in China by allowing the Winter Games to go ahead in Beijing.

“We have yet again borne witness to the hypocrisy (of the IOC)," Mandie McKeown, the executive director for the International Tibet Network, said at a news conference in Athens. “They’re handing over the Olympic torch to a host government that is so far removed from holding any of (the Olympic) ideals that it seems we’re living in a kind of warped reality.”

There has been international criticism of China’s treatment of Uyghur Muslims in the northwest region of Xinjiang, its crackdown on protesters in Hong Kong and its policies toward Tibet and Taiwan.

But the IOC, which previously held the 2008 Summer Olympics in Beijing, has shied away from the issue, saying it’s out of its remit.

In his speech in the ancient stadium of Olympia on Monday, IOC President Thomas Bach stressed that the Games must be “respected as politically neutral ground.”

Activists on Tuesday argued that human rights in the country have deteriorated since 2008, claiming that the Summer Games “emboldened” China.

Beijing launched a brutal crackdown about four years ago that swept up to a million or more Uyghurs and other mostly Muslim minorities into detention camps and prisons. Chinese authorities say their goal is not to eliminate the Uyghurs — a historically Muslim group of 13 million people — but to integrate them.

“If this press conference was to take place in China, I, as an Uyghur, would end up in a camp and maybe be subjected to sexual abuse and torture, as millions of my fellow Uyghurs are,” said Zumretay Arkin, program and advocacy manager for the World Uyghur Congress. “The Olympic Games are being handed over to a country actively committing a genocide.”

President Joe Biden's administration has affirmed the U.S. position that China’s repression of Uyghurs and other minorities was “genocide.” At June’s Group of Seven summit, Biden successfully pressed fellow leaders to include specific language criticizing China’s use of forced labor and other human rights abuses in their joint statement.

Arkin urged G-7 governments to follow up on that by boycotting the Beijing Games.

“We believe that we have a better chance today ahead of the Games that governments commit to a boycott ... than we had previously in 2008,” she said.

Pema Doma, the campaign director for Students for a Free Tibet, said the IOC was making “a very big mistake.”

“How can anyone think that there is not a red line anywhere in the world for genocide?” said Doma, who was briefly detained by police in Ancient Olympia before Monday's protest.

The handover ceremony was held without spectators at the renovated marble stadium in Athens where the first modern Olympics were held in 1896.

Three activists were detained Monday after sneaking into the strongly-guarded archaeological site of Ancient Olympia during the flame lighting, waving a Tibetan flag and a banner that read “No genocide games.” Another four were detained outside the site, while two more protesters were detained in Athens on Sunday after a protest on the Acropolis.

The latter seven have been released, but the first three remain in police custody in southern Greece.

The Beijing Winter Olympics will run from Feb. 4-20. Only spectators from mainland China will be allowed to attend.