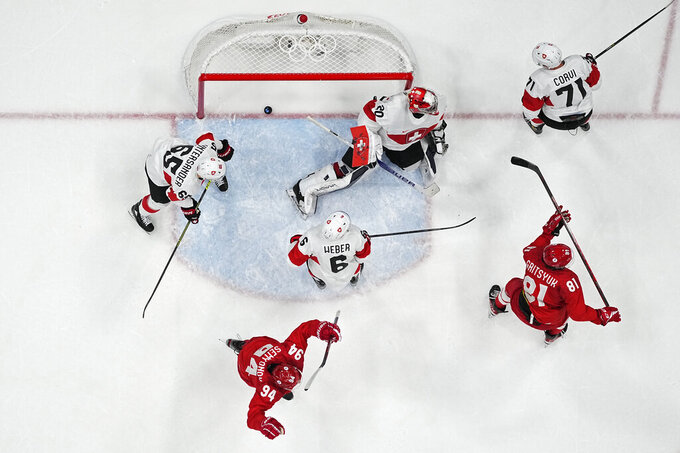 BEIJING (AP) — Whatever you call them this time around, the Russians are again going to be hard to beat in men’s hockey at the Beijing Olympics.

The team is playing as ROC at the 2022 Games, short for Russian Olympic Committee. Four years ago at the Pyeongchang Games, they won the gold medal playing as Olympic Athletes from Russia.

The name keeps changing because of past doping violations. The results on the ice seem to stay the same.

On Wednesday, the Russians played the opening game of an Olympic tournament being held on NHL-sized ice but without NHL players. Unspectacular as it may have been, it was a victory nonetheless — 1-0 over Switzerland.

“Everyone was excited to play. We were a bit rusty,” said Mikhail Grigorenko, who skated in 249 NHL regular-season games. “We’re going to be better around the net, and we’re going to try to score more goals in each game.”

The Swiss outshot the Russians 33-30, but they couldn’t get any of those past Russian goalie Ivan Fedotov.

Coming into the Olympics, the Russian team’s only scheduled tuneup game was canceled after suspected coronavirus cases for Latvia. That could account for the sluggish start against the Swiss.

The next group game against Olympic newcomer Denmark on Friday will give them another opportunity to get up to speed. But the Danes showed they're no pushover by upsetting David Krejci and the Czech Republic 2-1 in the late game thanks to 39 saves by Sebastian Dahm and goals from Markus Lauridsen and Frans Nielsen.

“It means everything,” forward Mikkel Aagaard said. “All the boys have been working so hard towards this."

The Russians got a fortunate bounce to beat Switzerland. Former Edmonton Oilers forward Anton Slepyshev scored after his shot pinballed off Swiss goaltender Reto Berra’s right pad and Enzo Corvi’s left leg and into the the net with 2.7 seconds left in the first period.

“Going forward, we’re going to try to play hockey that pleases the fans and that pleases us, too,” said Russian team coach Alexei Zhamnov, a gold medalist in 1992 and gold-medal winning assistant coach in 2018.

“I think we’ve got enough creativity. I think that with each game we’re going to improve and the creativity will appear.”

Discipline was an issue for the Russians, however. Slepyshev earned himself four penalty minutes with a headbutt, allowing the Swiss to build some momentum. But Romain Loeffel then ended the power play after getting a two-minute penalty for slashing.

“Russia is a strong team and we kept them to one goal, which is good,” said Switzerland coach Patrick Fischer, a former Arizona Coyotes player, “but obviously we’ve got to start scoring.”

Tricky opening games at the Olympics are nothing new for the Russians, who started in 2018 with a 3-2 loss to Slovakia. They then scored 18 goals in the following three games to start a winning run which culminated in beating Germany 3-2 in overtime for the gold medal.

That opening loss in 2018 was the only game of the tournament for forward Vadim Shipachyov, who was a healthy scratch for the remaining games. That won’t happen this time around because he’s now the captain and carried the ROC flag in Friday’s opening ceremony.

Zhamnov defended Shipachyov and the rest of the squad after a quiet game for the captain, who has 24 goals and 43 assists to lead the Kontinental Hockey League in scoring this season with 67 points.

“Each of the guys, each of our players will improve and this game here was just necessary for all of us and the coaching staff, too,” Zhamnov said. “It’s hard without game practice.”