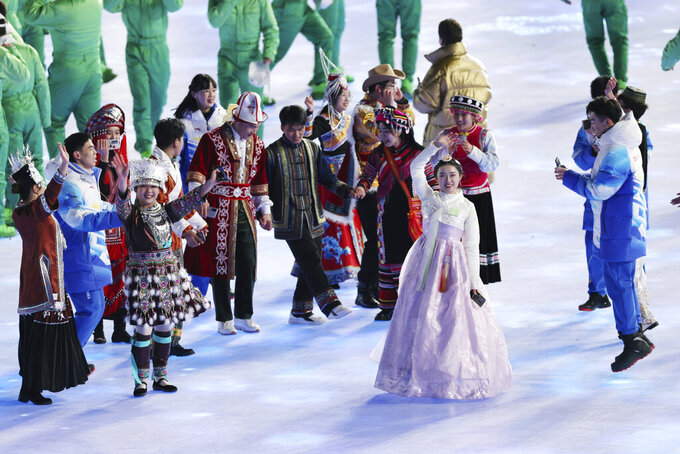 A performer, second from right, clad in a traditional Korean dress waves during the opening ceremony of the 2022 Winter Olympics in Beijing, China, Friday, Feb. 4, 2022. Major South Korean presidential candidates accused China of laying claim to their culture after the performer wore white and light purple hanbok dress during the opening of the Beijing Winter Olympics. (Lim Hwa-young/Yonhap via AP)

SEOUL, South Korea (AP) — Major South Korean presidential candidates accused China of laying claim to their culture after a performer wore a traditional Korean dress during the opening of the Beijing Winter Olympics.

A woman in a white and light purple hanbok dress marched along other performers apparently representing China’s various ethnic groups as they carried the Chinese national flag during Friday's event at Beijing’s National Stadium.

The resentment expressed by South Korean politicians came amid public sensitivity about recent Chinese claims on the internet about the origins of major Korean cultural items, including kimchi, a national dish of fermented cabbage.

But some South Koreans saw the reaction by their politicians as misguided, saying it was clear that the woman was representing an estimated 2 million ethnic Koreans living in China.

Aside from the online bickering about kimchi and hanbok, South Korea and China also have a long history dispute over the domain of ancient kingdoms whose territories stretched from the Korean Peninsula to Manchuria.

South Koreans see these kingdoms as Korean, but China began to claim them as part of its national history in the early 1980s. Experts say Beijing’s intent was to ideologically support its policies governing ethnic minorities, including the large communities of ethnic Koreans in the northeast, a group the hanbok-wearing performer was apparently representing at the Games' opening ceremony.

“Do not covet the culture (of others),” Lee Jae-myung, a presidential candidate representing the ruling Democratic Party at the March election, wrote on Facebook hours after the event.

Park Chan-dae, a lawmaker and spokesperson for Lee’s camp, accused China of disguising hanbok as Chinese and insisted that China's claims to Korean culture have become an “extremely significant issue.”

He also mentioned South Koreans’ anger over a Chinese government-backed academic project launched in the early 2000s, which produced a series of studies arguing the kingdoms of Goguryeo (37 B.C.-A.D. 668) and Balhae (698–926) as Chinese.

“We cannot ignore China’s blatant attempt to (claim Korean culture) while using a stage like the Olympics,” Park said during a briefing on Saturday.

When asked about the hanbok-wearing performer, Yoon Suk Yeol, a conservative candidate locked in a tight race with Lee, mentioned Goguryeo and Balhae and described them as “shining parts of Korean history.”

Lee Yang-soo, a campaign spokesman of Yoon’s People Power Party, said the opening ceremony was “tarnished” and vowed a stern response to Chinese attempts to “destroy the cultural identity of (South Korea) and distort history.”

Lee also criticized South Korean Sports Minister Hwang Hee, who is leading a government delegation in Beijing, for reportedly refusing to lodge a protest to organizers over the hanbok-wearing performer.

Hwang told South Korean reporters in Beijing that the opening ceremony could cause “misunderstandings” between the countries, but that Seoul had no plans to protest.

Kang Min-jin, a member of the progressive Justice Party, said the hanbok-wearing woman could have been a meaningful representation for ethnic Koreans living in China.

“Hanbok does not only belongs to us, but also to our fellow Koreans who live as Chinese citizens in China … they too have the right to their culture and clothing to be respected by their state,” she said on Facebook. “If hanbok had been excluded from the (opening ceremony) that displayed the traditional clothing of many ethnic groups living in China, how would that have felt for the ethnic Koreans?"