Sapporo says it can hold 2030 Olympics and also save money 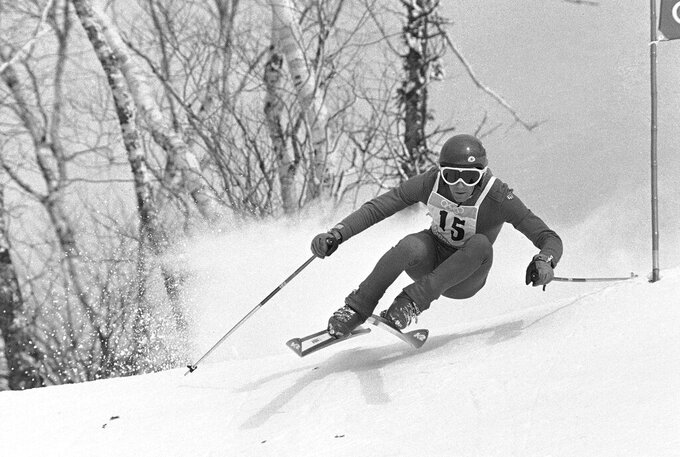 FILE - Mike Lafferty, Eugene, Ore. in Sapporo non-stop training run of Olympic men?s downhill on Mt. Eniwa track in which he finished fifth, Feb. 6, 1972. The northern Japanese city of Sapporo is set to announce on Monday, Nov. 29, 2021, what it says will be a reduction in costs that will make it an attractive venue for the 2030 Winter Olympics. (AP Photo/Michel Lipchitz, File)

TOKYO (AP) — The northern Japanese city of Sapporo became a frontrunner to land the 2030 Winter Olympics after the mayor talked up a plan Monday that he said would cut the costs of holding one of sports' most expensive events.

Mayor Katsuhiro Akimoto said at a news conference he would conduct a public opinion survey early next year. He did not indicate what effect it would have on a decision to pursue another Olympics.

However, a statement distributed by organizers on Monday suggested the decision had already been made to proceed.

“We will communicate our ideas about the bid for the Games and figure out the expectations and concerns of the public about the Winter Olympics and Paralympics,” the statement said. “Those opinions will be incorporated into all future planning studies.”

Public referendums in several European cities have voted down plans to hold Olympics.

Akimoto acknowledged there were concerns about the costs, especially after the official cost of the just completed Tokyo Summer Olympics was listed at $15.4 billion. Some think the real costs were twice as large, and all but about $6 billion was public money.

“People have expressed hopes, too, but they are especially worried about the heavy cost burden in the future,” Akimoto said.

The IOC has not indicated when it will pick the 2030 host city.

Sapporo officials put the projected costs at between 280-300 billion yen ($2.55-$2.65 billion). Officials said 80 billion yen (about $700 million) would be taxpayer money for capital costs with the rest coming from sponsors, ticket sales and the IOC.

Officials said this was a 20% reduction over estimates made in 2019.

Kio Momoi, a Sapporo resident, said she found it disturbing the bid was proceeding without any democratic consultation or discussion.

“If you are going to spend that kind of money, there are a lot more meaningful things that can use that money,” she said in a recent telephone interview. “They don’t care about regular people’s lives. No one came and asked us what we thought, but the powers that be made the decision.”

Sapporo hosted the 1972 Winter Olympics, and the mayor said at least 92% of the venues would be existing structures.

However, the cost of refurbishing existing venues will also be significant, and it's impossible to project costs accurately for an event that is almost a decade away. A University of Oxford study has shown that almost all recent Olympics run over budget.

Sapporo is only one of several cities expressing interest. They include the Spanish regions of Aragon and Catalonia, a possible bid from Ukraine, 2010 host city Vancouver, and some interest for 2030 or 2034 from Salt Lake City, which held the 2002 Winter Olympics.

Sapporo has frontrunner status, largely because it's ahead with its planning, and also because the International Olympic Committee is beholden after Tokyo incurred almost $3 billion in added costs because of the one-year pandemic delay.

The IOC no longer goes through a long bid process to pick host cities. They are now chosen by the Olympic body's leadership, and decisions have been taken out of the hands of rank-and-file IOC members.

The change came as the two most recent Summer Olympics — Rio de Janeiro and Tokyo — had bids soiled by allegations that IOC members were bribed for their votes.

Former IOC member Carlos Nuzman of Brazil was sentenced recently to 30 years in prison for, among other things, bribing IOC members in the 2009 vote for 2016.

He is appealing the conviction.

Tsunekazu Takeda resigned in 2019 as an IOC member and head of the Japanese Olympic Committee when he became embroiled in bribery allegations over bidding for the Tokyo Olympics. He denied any wrongdoing.

“There is no fixed timeframe for electing a host for 2030, or any other edition of the Olympic Games," the IOC said in a statement to The Associated Pres. "The Future Host Commissions, which oversee and monitor interest in future Games, are guided by strategic opportunities for the Olympic Movement and the global context.”