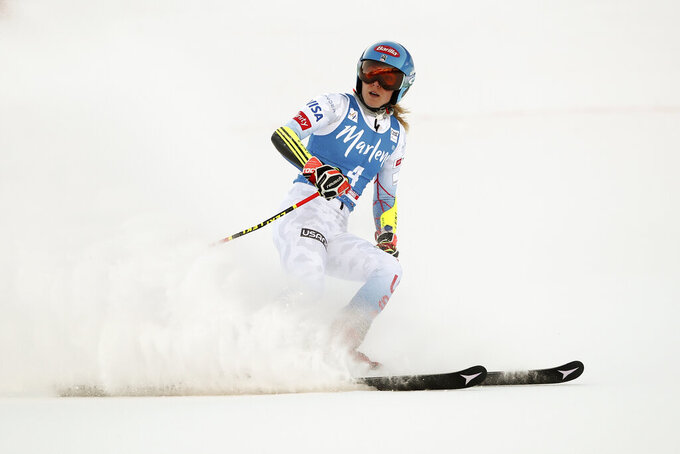 FILE - United States' Mikaela Shiffrin checks her time at the finish area of an alpine ski, women's World Cup giant slalom, in Kronplatz, Italy, Jan. 25, 2022. Empathizing with other athletes’ frank conversations about mental health got Shiffrin thinking about what awaits her at the Beijing Olympics. (AP Photo/Gabriele Facciotti, File)

Alpine skiing superstar Mikaela Shiffrin was paying attention when gymnastics superstar Simone Biles opened up about being burdened by “the weight of the world” and sat out a string of finals at the Tokyo Olympics six months ago.

Shiffrin was listening, too, when swimming superstar Caeleb Dressel revealed, after finishing first in five races at the Summer Games, how “terrifying” it was to confront “so much pressure in one moment; your whole life boils down to a moment.”

Observed Shiffrin: “He won all of the gold medals that were in Tokyo and, like, STILL felt that way.”

Empathizing with other athletes’ frank conversations about mental health got the 26-year-old from Colorado thinking about what awaits her at the Beijing Olympics, where the first of what could be five individual races for Shiffrin is next Monday’s giant slalom, an event she won at the 2018 Pyeongchang Games.

“Everybody expects, every time she steps in the start gate — no matter the event, no matter the preparation, no matter anything — that she’s going to win the race. And that’s an unreal expectation. She’s dealt with that her entire career, to a certain extent, but obviously, more recently, in the last few years that she has shown dominance,” said Mike Day, Shiffrin’s main coach with the U.S. ski team.

“It’s something, clearly, we need to be aware of. It’s a lot of pressure to bear, being the face of the Olympics or the face of a nation during an international event like this,” Day said. “We are trying, and have always tried, to provide a consistent atmosphere that’s comfortable for her and something that she knows everybody in that circle has her back and will take care of her when needed. And that’s, you know, more or less all the time.”

In a video interview with The Associated Press, Shiffrin discussed what she calls “pressure-adders.”

These can be situations or what she reads or hears via traditional media and social media. There are also the people she divides into two categories: One “bubble,” to use her word, is comprised of complete strangers (“Whether somebody is saying, ‘I hope you crash!’ or they’re saying, ‘Please win!’”), and the other includes Shiffrin herself, along with those closest to her: coaches, U.S. teammates, friends, family.

Those in the latter group "love to watch it when I ski well. It’s very exciting when I win. So you know that there’s going to be some level of disappointment if those things don’t play out in the ideal way,” Shiffrin told the AP. “And then you add, on top of that, (this is) the Olympics and this one moment in your athletic career that is ‘supposed’ to go right, because you’ve been working your whole life. ... And the chances of that happening are so low.”

Her mother, Eileen, who also serves as a coach, sees up-close what Mikaela goes through as they travel the ski circuit together.

“I have not been the perfect ‘role model-parent-coach,’ and I am still trying to find the balance. I could sometimes lose sight of the most important thing — Mikaela’s mental and physical well-being and happiness — in the middle of the chaos of a season, when it seemed that the most important thing was just getting the job done,” Eileen wrote in an email to the AP. “It has taken a blowup per season for us both to re-evaluate what we are doing. At those times, I do think it’s important that I am her mom, because that’s what makes me realize I have been pushing too hard and she is not thriving under it, so we need to reset and let her be happy.”

Awareness about, and concern for, mental health is still relatively new in elite sports.

The world is only just starting to learn about the sorts of concerns the people they cheer for, or against, deal with and how widespread such matters might be.

“What I always say is that we are athletes, not machines. So, it’s OK to make mistakes. We all have our weaknesses. We all get uncomfortable at times. Make errors. Have bad days," said Marta Bassino, a 25-year-old from Italy who won the 2021 World Cup giant slalom title. "We’re not robots. We’re human beings, when you get right down to it. And so at major events, where the pressure and expectations are high, there’s a lot of tension."

River Radamus, a ski racer from Colorado who turns 24 during these Olympics, described the phenomenon this way: “The pressure is always there, and you live with it, and you let it drive you. But also, you can’t let it dominate you, can’t let it take over your mentality.”

This is how Shiffrin thinks some folks view certain participants at the Olympics: “It has to be gold or else that’s a huge disappointment.”

For Biles, Shiffrin realized, “It even went a step beyond that. It wouldn’t have been a ‘disappointment;’ people just didn’t even consider it a possibility. And what I know from that kind of pressure is: It is not easy to win. Ever.”

Wrap all of it up, she continued, and the Games themselves are “not really an enjoyable process overall.”

Yes, Shiffrin acknowledged, there are wonderful snippets. Memories to cherish for a lifetime. And, yes, those make everything “worth it.”

“But it’s not like rainbows and sunshine and butterflies and everything that people sort of say,” Shiffrin said. “They’re like, ‘Wow, that looks like it was so much fun!’ And you’re like, ‘Well, it was fun to cross through the finish line and, in the next five seconds, see the green light (signaling the fastest time) and comprehend that. That was a fun thing.’ And the rest of the day — the whole rest of the day — was really, really pretty stressful and uncomfortable.”