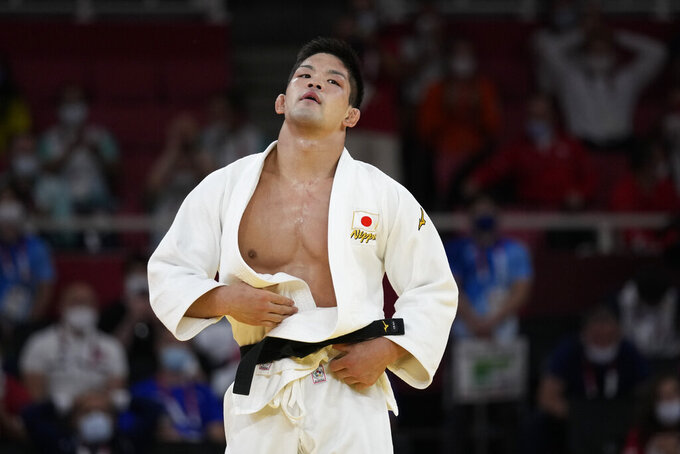 TOKYO (AP) — Shohei Ono made two of his first three opponents cry when he returned to judo at the Tokyo Olympics after 18 mysterious months away.

These were not small tears, either. Loud, body-shaking sobs emanated from the men who had to walk behind Ono in defeat through the otherwise hushed halls of the Budokan, giving voice to the anguish of extraordinary athletes whose lifetimes of preparation had still left them unequipped to survive four minutes against Japan's elusive judo superstar.

Turkey's Bilal Çiloğlu, the world's No. 9 lightweight, screamed and put his fists to his head after Ono pinned him helplessly to the tatami for an ippon, his wails echoing down the corridors.

Azerbaijan's Rustam Orujov, second ranked in the world and top-seeded in Tokyo, dried his eyes with his untucked gi after Ono ended the rematch of their gold medal bout in Rio de Janeiro with two waza aris 65 seconds apart.

Ono is the most dominant player on a Japanese judo team that might be the best in Olympic history. His combination of brute ferocity and tactical invention have kept him unbeaten since 2015, even in an Olympic weight class stacked with incredible talents — only one of whom has ever even scored a point against Ono.

The 29-year-old Ono is now a two-time Olympic champion after winning five straight matches at the Budokan, completing his return with a superiority over his peers that only he can boast in the modern sport. Not even two-time Olympic champ Teddy Riner, the massive French heavyweight who went a decade between losses, is as dominant as Ono now.

Ono is also idiosyncratic: He decided not to compete between the start of the coronavirus pandemic and the Olympics, choosing a path to gold that would seem foolish to a judoka without his abilities.

Ono has followed this strategy before: He skipped two straight world championships after Rio, but returned at the Budokan in 2019 to claim his third world title. Ono apparently feels he benefits more from hard training in Japan’s peerless domestic system than on tournament trips to far-flung locations, and his results are unquestionable.

“I was not in a match for a long time, but I decided to be practical,” Ono said through a translator. “I tried to engage in the training. I was not idle. I stayed focused.”

All the months away couldn't shake the focus of this judoka with two bulbous cauliflower ears shaped by years of being grinded into mats and attached to a head shaped like a paint can and stacked on a thick neck.

Ono looks like a brawler, but his judo is built on speed, strength and a relentless diversity of technique. He also sometimes uses the evocative language of martial arts instruction to voice his goals and aspirations: For instance, he said his goal for these Olympics was “to move from a judoka with overwhelming presence to a judoka with absolute presence. I think I have come closer to that target.”

Any notion of rustiness vanished when the same vicious competitor won his opening bouts Monday.

Because Ono hadn't fought since early 2020, he came into the Olympic draw unseeded and ranked 13th in the world. That meant disaster for Orujov, who likely would have steamrolled into the final if Ono hadn't been drawn into his quarterfinal.

Ono memorably beat Orujov in the Rio Olympic final and again in the 2019 world championship final. Ono took apart the decorated Azeri champion yet again at the Olympics, finishing him with 49 seconds left.

In the evening, Ono’s two fights were tougher. His gold medal bout was an epic showdown with Georgia’s Lasha Shavdatuashvili, a fearless veteran who secured his third Olympic medal while getting Ono into several dangerous situations.

“I had some fear going into golden score,” Ono admitted.

Ono won when he abruptly executed a sasae tsurikomi ashi — pulling Shavdatuashvili toward him and sweeping his opponent’s foot backward — for the decisive waza ari nearly 5 1/2 minutes into sudden-death golden score.

“I am a little disappointed, of course, but Ono is the best judoka,” Shavdatuashvili said. “He’s so strong, and he never makes mistakes. The best won.”

Ono is not a person who reveals much in public, and he didn't celebrate his second Olympic gold medal in any visible way on the floor of the venerable Budokan, a sacred place to him since his youth.

Ono put his hand on his heart for the Japanese anthem, but after he accepted his medal from IOC President Thomas Bach, he shrugged it onto his neck and stood expressionless on the podium like he was waiting for a bus.

But inside, Ono was aware of the moment. Before bowing and leaving the tatami, he stared for a long moment at the ceiling of martial arts' spiritual home.

“I wanted to inscribe every memory into my head,” he said.

Ono’s repeat quest is over, but his games aren’t: He will compete in the first Olympic mixed team event Saturday, joining Japan’s best in another competition to cap what is shaping up to be a dominant exhibition. Japan has won four golds, one silver and one bronze from just the first three days in Tokyo, with eight more weight classes to go.

“I’m already thinking about that team match right now,” Ono said. “I can’t relax. I just want to get a point for Japan.”