St. Louis Olympics was really World's Fair with some sports 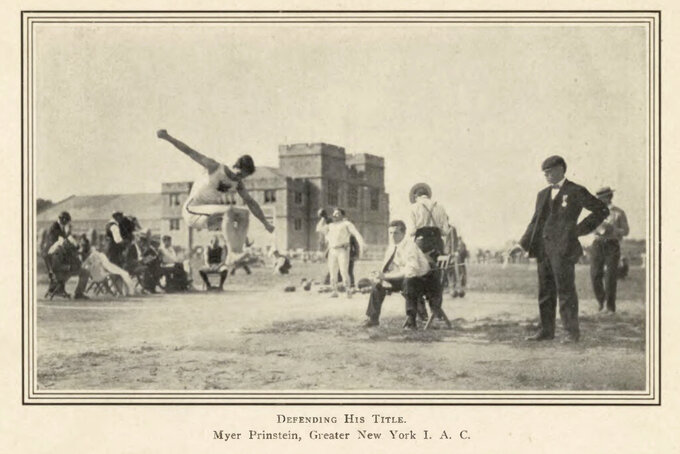 ST. LOUIS (AP) — The first Summer Olympics held in the U.S. looked unlike anything that had happened previously in Europe.

Or that would happen again anywhere else.

The Games originally were awarded to Chicago for 1904, but organizers of the World's Fair in St. Louis put up such a fuss about a second international event held simultaneously that they threatened to have their own athletic events. It took the founder of the modern Olympic movement, Pierre de Coubertin, to forge peace by moving the Olympics south.

Not that he did so with much glee. Writing later of the bizarre extravaganza that took place that summer, de Coubertin said: "I had a sort of presentiment that the Olympiad would match the mediocrity of the town.”

Fred Lorz looked to have won the marathon — until it was discovered that he rode part way in a car. Organizers ran “Anthropology Days,” when members of indigenous tribes from around the world on hand for the Louisiana Purchase Exposition were plucked from the fair and told to compete with no warning. Boxing and freestyle wrestling debuted, sports that have clung to the Summer Olympics until the present day, along with long-since-forgotten croquet and tug-of-war events.

Glen Echo Country Club, the first golf course west of the Mississippi River, was completed in 1901 and remains a private club. Forest Park, where the lake was used for swimming, diving and water polo, remains a popular place for running, cycling and other recreational activities. Francis Field just to the east of the park is used by the Division III football, soccer and track and field teams of Washington University in St. Louis.

“The first Olympic Games in the New World would produce a profound and permanent result," author and historian Carl Posy wrote years later, “shaping every Olympic Games to come."

The St. Louis Games were the first at which gold medals were awarded to winners, and they remain the only medals made entirely of gold. That proved lucrative for a trio of Americans — gymnast George Eyser, swimmer Charles Daniels and aptly named track star James Lightbody — that each won three gold medals.

U.S. athletes won 78 of 96 gold medals and 239 of 280 medals overall. There are several reasons for the dominance. The outbreak of the Russo-Japanese War and the challenge in getting to St. Louis prevented many of the best European athletes from competing. Fifteen nations and a few unattached individuals represented in the “Gateway to the West.”

WOMEN HAVE A (SMALL) PLACE

There were nearly 100 events during the months-long Summer Games, but archery was the only one in which women were officially allowed to compete. Lida Howell bested five other archers during the two-day competition.

Woman also stepped into the boxing ring, though the bouts were considered display events. It was the last time women boxed at the Olympics until the 2012 Summer Games in London.

The marathon may be the single most memorable event from the 1904 Games. The race took place in 90-degree heat on dusty roads with only a single water break, and 18 of the 32 athletes withdrew from exhaustion.

Lorz made headlines when he dropped out of the race, rode several miles in a car, then returned to the course and crossed the finish line first — only to be disqualified as he was about to accept the gold medal. Cuban runner Felix Carbajal was done in by stomach cramps after stopping beside the road to gorge on apples. South African runner Len Tau was chased off course by a pack of wild dogs. One runner had a stomach hemorrhage and nearly died.

The winner was Thomas Hicks, whose assistants fed him eggs, shots of brandy and doses of the toxic stimulant strychnine to keep him going. He was hallucinating as he crossed the finish line in 3 hours, 28 minutes, 53 seconds.

It was controversial then and downright racist today, but an enduring part of the 1904 Games was what organizers called “Anthropology Days.” They recruited aboriginal Japanese, Native Americans, Igorot people from the Philippines and others from what they called “uncivilized tribes” who attended the World’s Fair to try such events as archery and track.

Not surprisingly, the unprepared athletes fared poorly, and many Americans and Europeans smugly concluded they must be superior. But it was de Coubertin who called the production “an outrageous charade” and presciently said, “It will lose its appeal when black men, red men and yellow men learn to run, jump and throw, and leave the white men behind.”