Sumo scare? Riders say horses might be spooked by statue 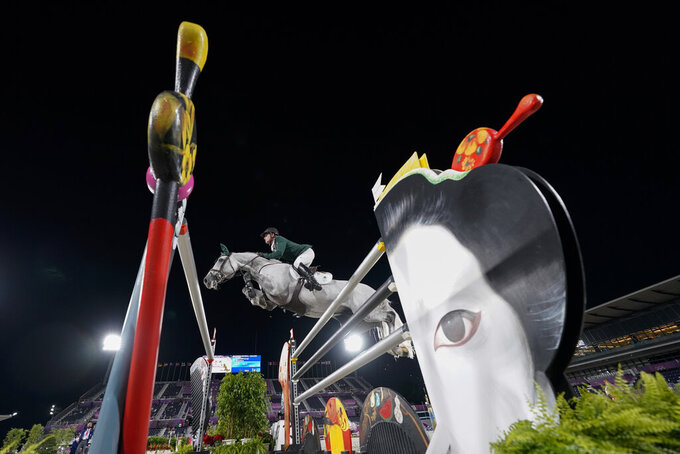 KAMIYOGA, Japan (AP) — Equestrian jumpers aren't keen on surprises. Neither are the horses, and it takes years of training to keep them from getting spooked.

Of course, no horse in Tuesday night's Olympic jumping qualifier had ever seen anything like obstacle No. 10.

“As you come around, you see a big guy’s (butt),” British rider Harry Charles said.

“There's a lot to look at,” Ireland's Cian O'Connor added.

Riders say a life-size sumo wrestler positioned next to the 10th obstacle on the 14-jump Olympic course may have distracted several horses in qualifying for the individual jumping final Tuesday night. A few pairings pulled up short of the barrier, accumulating enough penalty points to prevent entry into Wednesday's finals.

The statue is positioned to the left of a jump placed in the corner of the arena. Hunched over and seemingly ready to attack, the wrestler is facing away from approaching riders, meaning that when they complete a sharp turn to take on the jump, the first thing horse and human see is the wedgie created by the wrestler's mawashi.

“I did notice four or five horses really taking a spook to that,” Charles said.

Most of the course’s hurdles are decorated with a distinctly Japanese feel — geisha kimonos, a miniature Japanese palace, taiko drums.

None caught the eye quite like the sumo wrestler.

Among the horses alarmed by the setup was France's Penelope Leprevost — a team jumping gold medalist in 2016. She wasn't sure if the wrestler specifically threw off her 12-year-old stallion, Vancouver de Lanlore.

“Maybe," she said. "We tried to relax our horses in the turn, and maybe they’re surprised to see a vertical so close. I don’t know.”

Vlock went 34th in the 73-horse field. After seeing others have issues, he and trainer Darragh Kenny of Ireland — also a competitor in Tuesday's field — made a point of trotting their horses to the 10th jump before beginning their runs so the animals could look it over.

The hope was that familiarity would breed bravery.

“It is very realistic,” Vlock said. "It does look like a person, and that’s a little spooky. You know, horses don’t want to see a guy, like, looking intense next to a jump, looking like he’s ready to fight you.”

Vlock and Kenny both cleared the obstacle without issue. Kenny finished second with no penalty points and a time of 82.01, while Vlock fell short due to other issues.

Of course, it's hard to know what's in a horse's head. Some riders chalked up the troubles to how close the jump was positioned to the turn. Others blamed the stadium's bright lights that also led to concern at jump No. 1.

Medal hopefuls Scott Brash of Britain and Martin Fuchs of Switzerland believed cherry blossoms positioned on the other side of the jump were the more likely culprit.

Whatever the cause, it's not surprising to Olympic veterans that there's drama around the park. The Games have a reputation among riders for flashy course design, including an oddly shaped jump at Rio de Janeiro in 2016 that caused similar consternation.

“To be honest, you expect it in the Olympic Games," Brash said.

And that's OK with them.