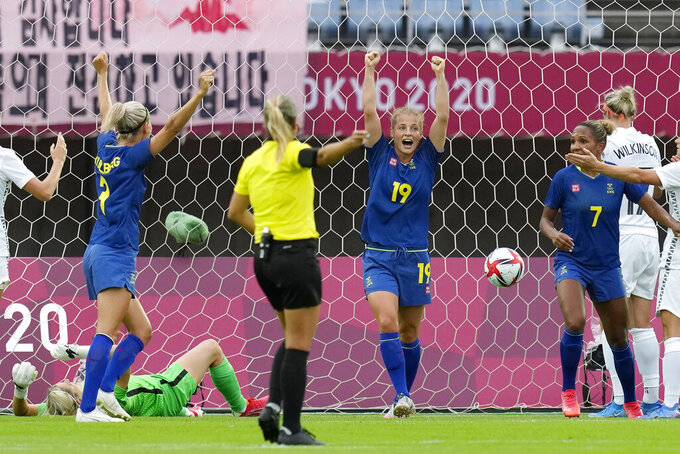 Sweden's Anna Anvegard (19) celebrates after scoring on a header against New Zealand during a women's soccer match between New Zealand and Sweden at the 2020 Summer Olympics, Tuesday, July 27, 2021, in Rifu, Japan. (AP Photo/Andre Penner)

KASHIMA, Japan (AP) — Anna Anvegard and Madelen Janogy scored a goal each Tuesday to help Sweden finish Group G with a perfect record after a 2-0 victory over New Zealand in the women's Olympic soccer competition.

Anvegard headed in the opening goal in the 17th minute and Janogy knocked in the other in the 30th.

Sweden is looking to reach its second straight Olympic final after losing to Germany in the gold medal match at the 2016 Rio de Janeiro Games.

The Swedes finished five points ahead of the United States and Australia, who drew 0-0 in the other group game. New Zealand was eliminated.