Swimming federation to elect leader in shadow of FIFA case 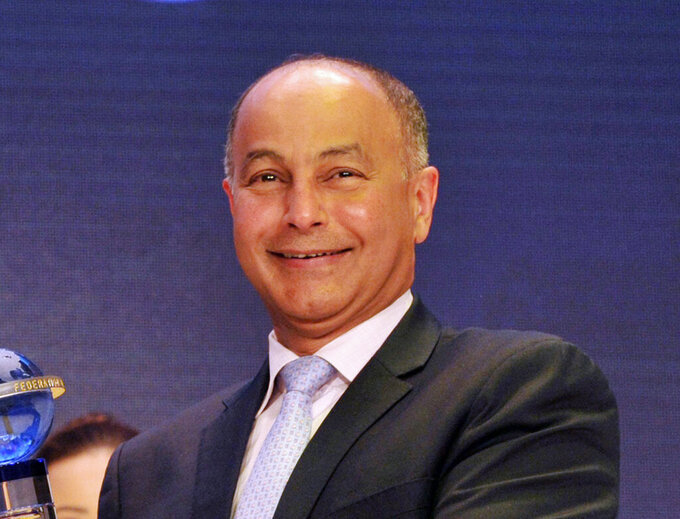 FILE - In this file photo dated Sunday, Jan. 31, 2016, First Vice President of the International Swimming Federation, FINA, Husain Al Musallam, during the FINA World Aquatics Gala in Budapest, Hungary. A new president is taking over swimming’s governing body with the same FIFA bribery case casting a shadow on him for the past four years, Husain al-Musallam is the only candidate to lead the Switzerland-based FINA at an election meeting Saturday June 5, 2021. (Attila Kovacs/MTI FILE via AP)

GENEVA (AP) — A new president will take over the governing body of swimming on Saturday with a FIFA bribery case casting a shadow on him — as it has for the past four years.

Husain al-Musallam is the only candidate to lead Switzerland-based FINA. The election will be held in Doha, Qatar.

One of the Kuwaiti official’s first duties will be to oversee 49 medal events — the most of any governing body — at the Tokyo Olympics.

Al-Musallam's bid to take over the sport comes even though he was implicated in 2017 in the FIFA case in federal court in the United States. Under the name “co-conspirator #3,” he was accused of steering payments from Olympic Council of Asia accounts to a soccer official from Guam who pleaded guilty to two charges of wire fraud conspiracy and one of failing to disclose foreign bank accounts.

More than four years later, the case has not been publicly advanced by the U.S. Department of Justice. The soccer official from Guam hasn't been sentenced and al-Musallam, the OCA's executive director since 2005, hasn't been indicted or cleared.

The candidate's campaign said he “strongly refutes … old allegations that date back many years.”

“He has never been charged with any alleged offense and has always offered his cooperation with the relevant authorities if requested,” al-Musallam’s campaign said this week in a statement to The Associated Press.

The allegations are old enough to have been a factor at the previous FINA elections in July 2017. Back then, Al-Musallam was allowed to run unopposed as senior vice president when FINA said there was “no case to answer” based on publicly available evidence.

Still, veteran International Olympic Committee member Richard Pound, a Canadian who competed in swimming at the 1960 Rome Games, said his sport clearly had “governance issues that are not being addressed.”

“Before somebody steps over the precipice, the (FINA) membership should examine itself and take the right steps,” Pound told the AP ahead of the current presidential campaign.

No opponent to al-Musallam was proposed this year. The election is being conducted under new rules where presidential candidates cannot apply for any other seat on the ruling FINA Bureau.

“You will appreciate that the IOC will not comment on candidates for (international federation) elections,” the Olympic body said when asked about FINA’s issues.

However, IOC officials have expressed public concern since 2018 about the past two elected presidents of troubled boxing body AIBA.

Omega, the Swiss watch brand that is a top-tier sponsor of FINA and the IOC, also declined comment on the election.

Al-Musallam remains a member of the IOC’s influential Solidarity Commission, which allocated hundreds of millions of dollars in grants and scholarships to athletes and national Olympic bodies.

That Olympic committee had been chaired by al-Musallam’s long-time boss at the OCA, Sheikh Ahmad al-Fahad al-Sabah. He was named as “co-conspirator #2” in the court documents and within days was forced from his seat on the FIFA Council.

Sheikh Ahmad continued to be an influential IOC member and leader of the group of national Olympic bodies, known as ANOC, but stepped aside from both roles in 2018. He was indicted in an alleged forgery case with four others by prosecutors in Geneva and their delayed trial is due to begin in August. The sheikh has denied wrongdoing.

On June 28 in New York, a sentencing control hearing is scheduled for the Guam soccer official who pleaded guilty, Richard Lai.

One of the new president’s first tasks after replacing 85-year-old Julio Maglione of Uruguay is to appoint a new FINA executive director. The job had been held since the 1980s until March by one man, Cornel Marculescu.

Al-Musallam has promised a new era of transparency for FINA, whose finances have long been opaque.

“Husain is fully focused on delivering an ambitious reform agenda for FINA,” his campaign said, “that will benefit athletes in every country of the world.”