Swimming wraps up with Dressel going for another gold medal 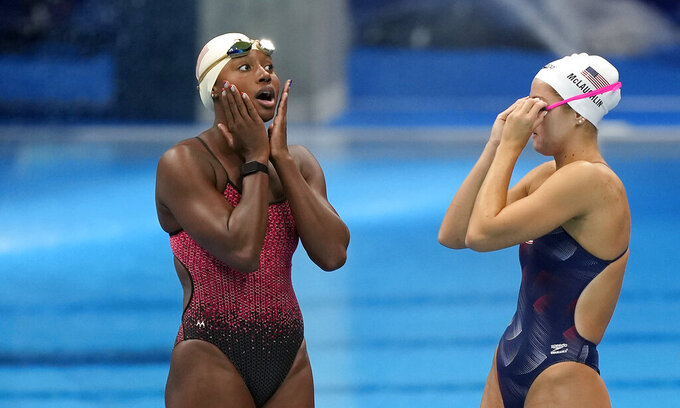 Simone Manuel of the United States, left, reacts with teammate Katie McLaughlin, right, at the pool during a swimming training session at the Tokyo Aquatics Centre at the 2020 Summer Olympics, Thursday, July 22, 2021, in Tokyo. (AP Photo/Martin Meissner)

Allyson Felix will attempt to pass Merlene Ottey of Jamaica as the female Olympian with the most track and field medals in the mixed 4x400 relay and the women's 100-meter dash will be decided after a spirited day of heats.

The final day of swimming is a big one for Caeleb Dressel. He’ll go for two more gold medals in his sights in the 50-meter freestyle and the 4x100-meter medley relay. The Americans are big favorites in both events.

Though the 50 free is always a bit of a crapshoot decided by a few hundredths of a second, Dressel has turned his brilliant underwater technique into 50 free titles at the past two world championships. The U.S. men, meanwhile, have never lost a medley relay at the Olympics.

Also keep an eye on Simone Manuel, who will swim her only individual event of these Games after failing to qualify for the American team in the 100 free, an event she won at the Rio Games. Manuel revealed at the U.S. trials that she had been diagnosed with overtraining syndrome, which forced her to halt training for nearly a month. Cate Campbell and 100 free champion Emma McKeon are also expected to be among the leading contenders in the 50 free.

The Americans also are the two-time defending Olympic champions in the women’s 4x100 medley relay, but will be challenged by an Australian women’s team that had won five gold medals as of Friday.

In the men’s 1,500 free, American Bobby Finke could take another medal after a surprising victory in the 800 free. Swimming will be the highlight of NBC's primetime coverage that begins at 8 p.m.

The women's 100-meter dash will be decided after a spirited round of early heats.

And Marie-Josee Ta Lou, the Ivory Coast sprinter who finished an excruciating fourth in Rio de Janeiro, kept saying “Wow! Wow!” after she crossed the finish line in a blistering personal best of 10.78.

They were the fifth, sixth and seventh-fastest times of the year, produced on a day when seven of 54 sprinters hit a personal best — all in an opening round.

In the mixed 4X400 relay, a medal for the Americans would push Allyson Felix past Merlene Ottey of Jamaica as the female Olympian with the most track and field medals. She currently has 10 medals. Much of the track and field coverage will be on NBC in primetime, but select qualifying rounds will also air live in primetime on USA Network.

The U.S. men’s basketball team can secure second place in Group A and clinch a berth in the Olympic quarterfinals on Saturday when it faces the Czech Republic.

A win would also give the U.S. a chance at securing a top-four seed for the quarterfinals, which will be played in Saitama on Tuesday. Having a top-four seed is critical because it would mean that the Americans would not face any group winners in the knockout stage before the semifinals. The game will be streamed live Saturday at 8 a.m. on Peacock with encores later on both NBC and NBC Sports Network.

The knockout round begins in beach volleyball and the top American team of April Ross and Alix Klineman made it through the preliminaries unscathed, winning all three of their matches.

That puts the Americans on the opposite side of the bracket from the overall No. 1 overall, Canada. They would not meet until the gold medal match. The elimination rounds will be on NBC in primetime.

The elimination round of men's beach volleyball will be aired live on NBC beginning at midnight, along with coverage of the men's 1,500-meter free and the BMX Freestyle Finals.

The finals in men’s and women’s singles tennis will be presented on the Olympic Channel beginning at 2 a.m.